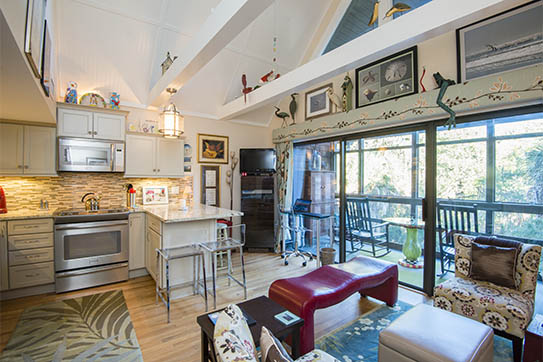 “We are 251 steps to the beach,” Donna Porritt says as I step into her Mariner’s Watch villa, “but who’s counting?”

At 625 square feet, there is a lot about the villa that could rely on numbers. Whether you attribute the tiny house movement or reducing your carbon footprint, the art of downsizing—living full time in a significantly small space without sacrificing the luxuries and belongings that matter to you most—is fun, and Donna and husband Sam Bromage perfected it by having “right-sized” living in mind from the start of their renovation until the day they brought the last of their belongings from Connecticut. 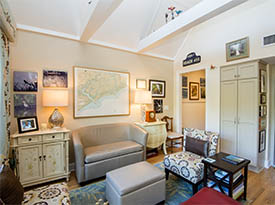 Artwork in a villa on Kiawah Island

Such belongings were not sacrificed by the retired couple, and in fact were built into the villa redesign. Designers widened ceiling beams to accommodate artifacts such as their German-inspired whirligig collection, and before giving artwork to children and grandchildren, Sam and Donna had their most beloved pieces photographed and digitized in miniature for their villa. In digital format, the couple can share and constantly rotate the art on TV screens and in digital frames. Projects like digitizing their artwork allowed for new memories, like when Sam got in touch with a California caféowner featured in one of their prints who was delighted to learn the caféhad made a lasting impression.

That efficient but nonetheless romantic thinking was echoed in their villa purchase when the couple’s Kiawah Island Real Estate sales executive, Lewis Driskell advised them, “Buy what you need, not what you think you’ll need.” 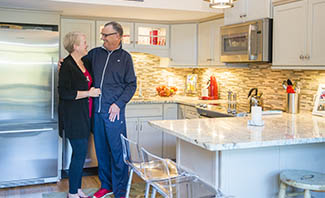 Sam and Donna in their villa on Kiawah Island.

With that in mind, the couple added beadboard, a full-scale kitchen, and hardwood flooring to the square footage that suited them. “We’ve always lived in smaller spaces,” says Donna. The renovation was not without challenges. The modular closet arrived in 14 boxes for Sam to assemble. Wainscoting had to be shaped around the utility panel, which the original builders placed in an unseemly area right by the front door. Donna converted it to a magnetic mission control board for grocery lists and notes. Twin beds made for storing under a king size bed were ordered, and a two-blade fan added a lighter touch to the bedroom than would a four-blade.

Sam and Donna like that sort of whimsy, and that is what visitors may expect when stopping by their villa: a light, carefree space that Sam jokes can be cleaned top-to-bottom in 28 minutes, and that frees the mind for life’s actual goings on. For Sam and Donna, that is doing a variety of volunteer work advising non-profit and other organizations using their backgrounds and skills, and enjoying the tranquility of their lagoon view as well as several walks a day to the beach. It’s the same beach they’ve been visiting since 1981 and now get to call home in their soon-to-be full time, right-sized villa, but again, who’s counting.