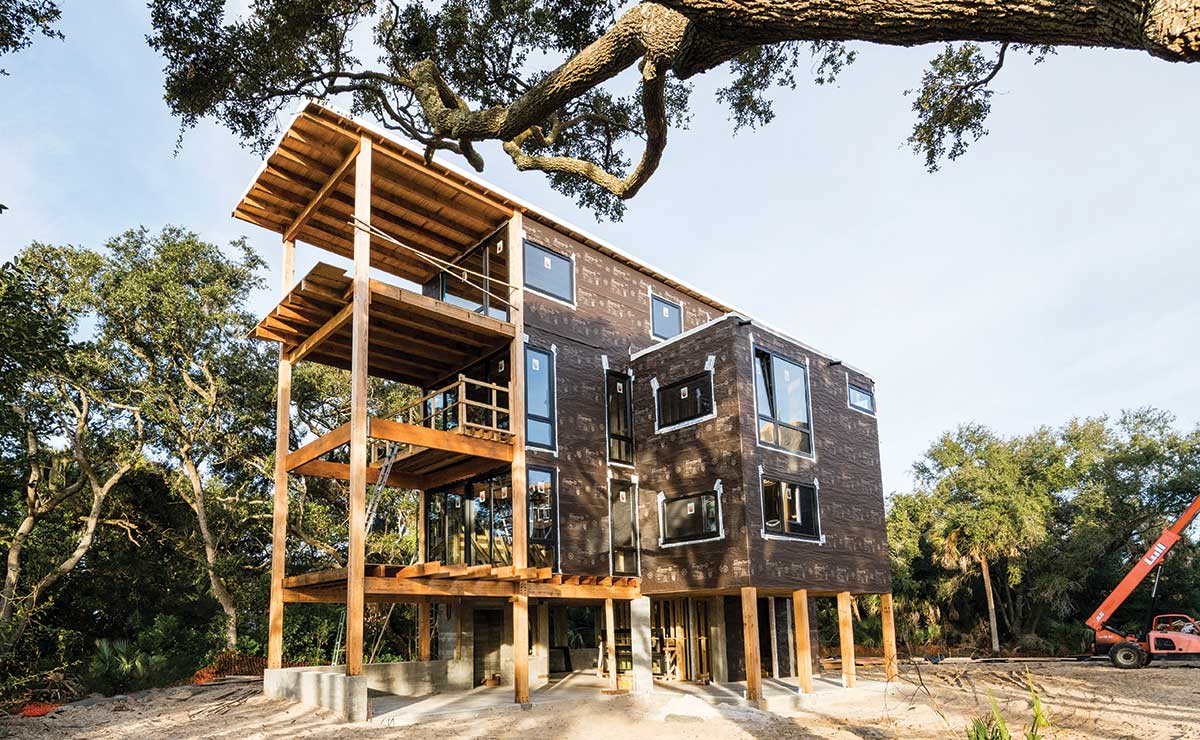 Master Planning is An Art.

Cultivating a genuine community requires oversight that is strict enough to maintain a long-term vision but relaxed enough to allow authentic expressions of design and the balance of form against function. Control the aesthetic too tightly and you end up stuck in a formula, forever playing a single note. Too laissez-faire and aesthetic cohesion falls apart into a mishmash of singularity.

Real, living communities are ultimately a reflection of their people. Kiawah’s master planners know this better than most. The Island’s architectural vernacular unfolds in real time, a careful dance along this fine line of thoughtful oversight and impartial latitude. And so it is no wonder that the Kiawah oeuvre is beginning to include more modern expressions of architecture.

Modern architecture as we know it today is polarizing, to be sure. But if you look at the concept in a larger sense, all design is modern at one time. “All great communities have layers and layers of history,” says Mark Permar, Kiawah’s longtime land planner. “The older buildings that we think of as grounded in tradition were actually pretty progressive at one time. Real communities have a diversity of elements.”

And aside from a small set of more tightly designed neighborhoods (Cassique, The Settlement), this is true on Kiawah. Its neighborhoods are an authentic expression of the last forty years. And even newer neighborhoods like Ocean Park are unfolding as a pleasing mix of design sensibilities. “[At Ocean Park] there’s traditional next to progressive,” says Permar. “And they dance well with each other because they honor massing, form, and scale. They honor materials. They honor color.” Each house is obviously part of a larger community with shared aesthetic values. But the homes reflect their owners in a way that feels authentic.

Recent developer-led projects like Front Nine Lane and the Cottages at Marsh Walk in Ocean Park are a response to a growing curiosity in progressive architecture. Permar and the partners tested the waters with Ocean Park’s Marsh House in 2016. The amenity, with its angular rooflines and wide open fenestration, was met with resounding approval. 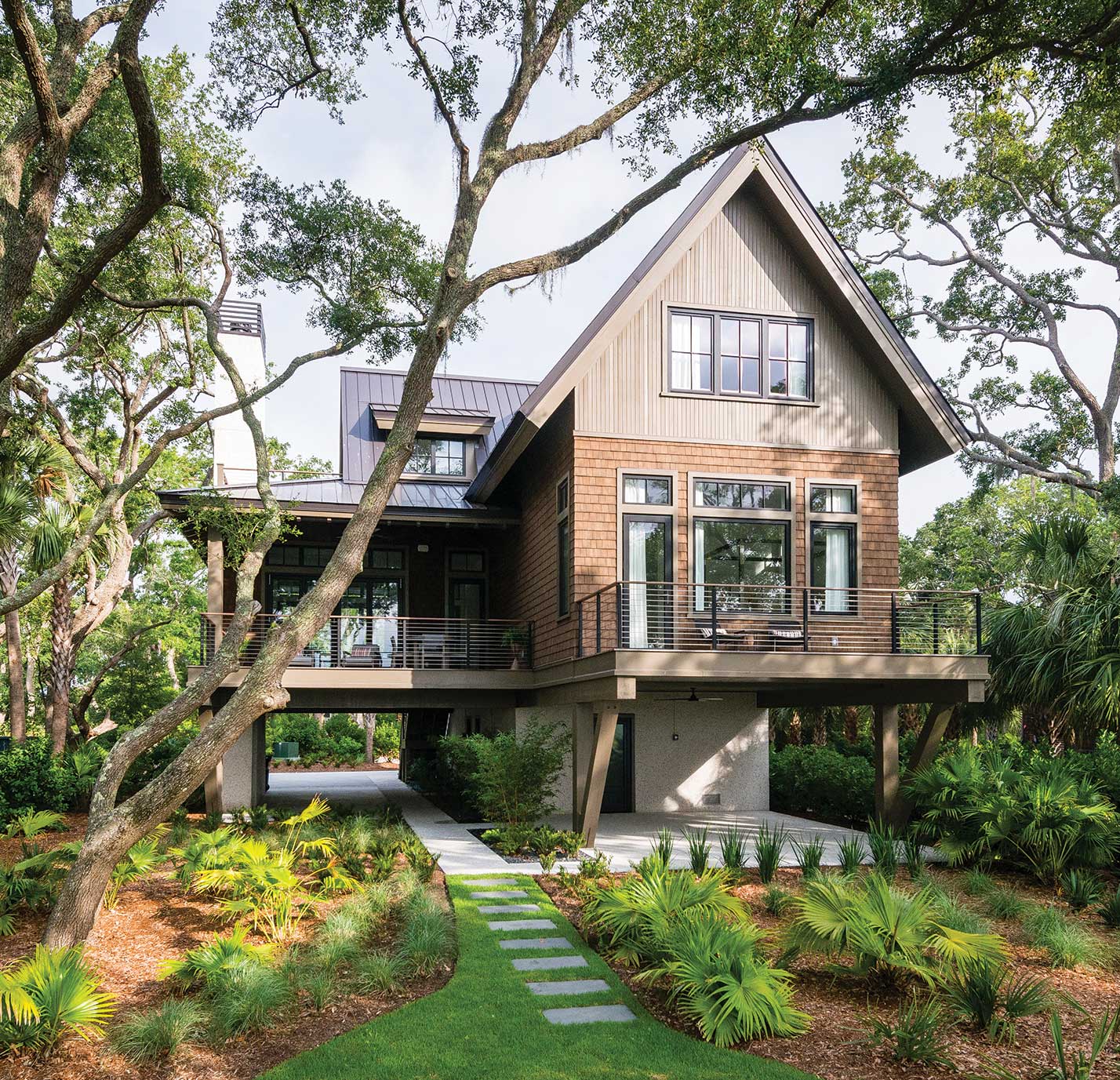 For Kiawah’s Architectural Review Board (ARB), the lead story has always been “designing with nature,” fitting homes within the existing environment. “One of the advantages of a more contemporary aesthetic is that you’re not so hemmed in with traditional floor plans,” says Amanda Mole, director of architecture for the Kiawah Partners and ARB chair. “This allows you to work around trees, topographical features, and take better advantage of views. It allows for a much more creative approach.” What’s more, the inherent simplicity of modern architecture allows the charisma of the natural setting to really shine.

In prevailing interpretations, modern architecture is defined by efficiency, clean lines, function over form. “It’s about simplicity and directness,” says Permar. “It’s design that serves a purpose, as opposed to decoration.” And natural light. So often, modern architecture relies on glass and light as fundamental components. But things can go quickly awry without a baseline respect to site elements, to environment and vernacular origins. “You can get sideways out here with a modern house that is crisp white, almost cold,” says Permar.

In a way, this modern Kiawah aesthetic is just a new take on traditional ideals.

The ARB is careful not to dictate style, aside from a few distinct neighborhoods on the Island. But they do control for authenticity, weighing in on proportion, materials, and color. In Mole’s words, the ARB is the keeper of the aesthetic vision for Kiawah Island, a responsive counsel that maintains the fabric of the community and a respect for the natural setting.

So in a way, this modern Kiawah aesthetic is just a new take on traditional ideals. Marsh Walk, Front Nine Lane, The Marsh House—these are all projects using the same time-honored materials and the traditional Kiawah shingle style. But it’s reconfigured, made new with innovative form.

The new Cottages at Marsh Walk borrow heavily from the beloved Marsh House amenity. The cottages are defined by big windows and interior living spaces that connect meaningfully to the out-of-doors. Half of the house is devoted to an open floor plan kitchen and living room. But for Mole and the ARB team, the trees surrounding the cottages are the main event. “There are a lot of live oaks with beautiful branching. It allowed us to site the cottages in a way that minimized impact to trees,” she says. “In the end, the homes look like they have always been there.”

But Front Nine Lane is perhaps the boldest interpretation of this emerging modern aesthetic. Set along the first hole of the Island’s famed Ocean Course, the limited release neighborhood is sited in a way that completely rethinks the status quo. Most homes on Kiawah line up like soldiers on the oceanfront or the golf course or the marsh. But Front Nine Lane interacts like a sine curve against the course—coming and going in proximity. The homes are clustered in groups of three, with a sort of shared inner courtyard. This configuration lends itself to interesting views—direct views of the course and ocean, but also diagonal views through the trees and into the courtyards. That sets up a varied floor plan for each of the homes, a different response to each site and vista. Because, as Permar says, “There’s nothing more creative than seeing the same thing differently.”

The four-story homes (three habitable floors) are dramatic in proportion but modest in scale, maxing out at 4,028 square feet. The vertically oriented floor plans are expansive, open configurations of indoor and outdoor space. But the design ethos remains the same. “It’s very connected to the natural systems,” says Permar. “How does it accept the sun and breezes during different times of the year? How is it connected to natural grade?”

Permar and the partners really wanted to make a statement with Front Nine Lane. They wanted to push the envelope. Texas-based architectural firm Lake|Flato had caught the team’s attention several years prior. Their residential portfolio is rooted in the Southwest—big horizons, desert scapes, Texan flora. But Permar saw the intelligence of the buildings. “You can tell they are really sensitive to the environment. A lot of their homes literally grow out of slopes. They discover ways to have multiple levels, but it doesn’t feel like a big building. They find a way to integrate modest scale.”

For Lake|Flato’s Graham Beach, the Front Nine Lane concept started with the views. “Tucked into the dense, old-growth oak trees, you’re overlooking the golf course and the ocean beyond. I just loved the layering of those views. From the beginning, we knew there was an opportunity to make these homes more vertical and get you up into the treetops.”

The vertical blueprint is also a nod to the iconic Charleston single house, which evolved, in part, as a response to the natural environment, to ocean breezes and afternoon shade.

For Beach, architecture is about honesty. “We start our process with a bunch of site analysis. Looking at the climate, wind and sun patterns, humidity levels, building an architecture that’s responsive to the place. It’s not so much about trying to be modern, but an honesty in the approach.” The vertical blueprint is also a nod to the iconic Charleston single house, which evolved, in part, as a response to the natural environment, to ocean breezes and afternoon shade. “Probably every architect that goes to Charleston is enamored by the single house,” says Beach. “The narrow footprint brings in a ton of light and cross ventilation. We tried to take some of these historically relevant and materially contextual precedents and present them in a slightly unexpected and more modern way.”

This philosophy doesn’t end with the hard materials. Charleston-based landscape architect Cindy Cline of Wertimer + Cline was brought in early in the concepting process, and her design is in perfect concert with Lake|Flato’s modern sensibility—clean lines, function over form, and an emphasis on the natural environment. The goal is to heal the homesites back into nature. “We use mostly native plants on the periphery so that the home feels as though it has been part of the surrounding landscape for quite some time,” explains Cline. “Then as we move closer to the buildings, you move to the heart of the space, and that’s where the planting design may become a little bit more structured, a bit more refined.” 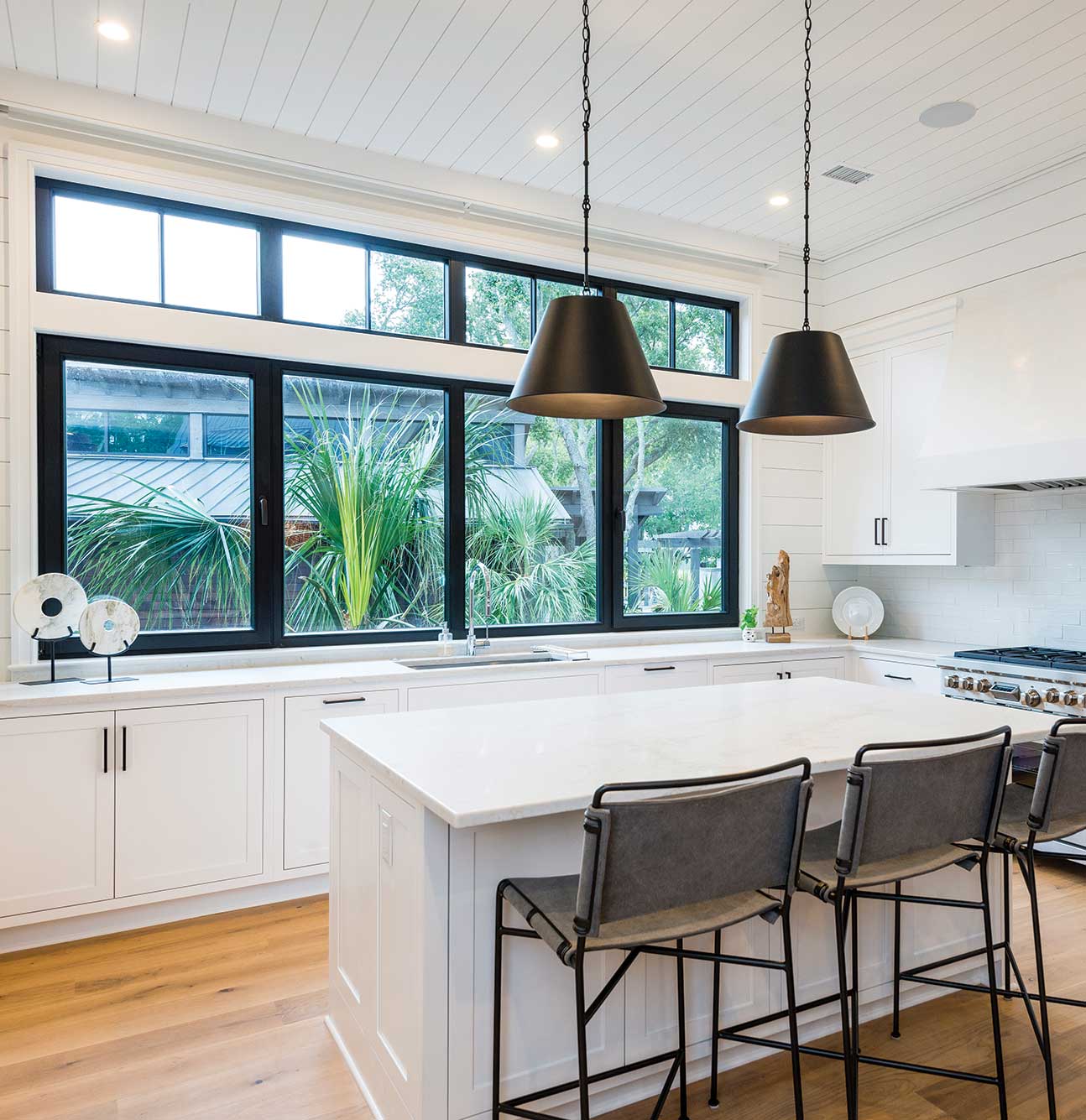 The landscaping is a thoughtful response to the buildings. “It’s not like the architects do one thing and the landscape architects do something else,” says Permar. “It’s all the same thing, woven tightly together.” And just like the architectural aesthetic, Cline’s plans display a fundamental simplicity. She plays with texture and layering but keeps the palette simple. “We use masses of just two or three things,” says Cline. “There’s more power and drama in that.” The courtyards are all slightly different, each defined by a significant characteristic—a grand live oak or a grove of sabal palms.

“It’s important to the ARB that we not create barriers,” says Cline. “Fences and walls are impediments to nature. They prefer vegetative buffers that ground the buildings to the landscape and allow native wildlife to roam. Spotting a flock of egrets or the occasional alligator is the essence of the Kiawah experience—naturally and aesthetically.” This lack of barriers, the indistinct line between intentional landscaping and the natural environment, is a direct reflection of Kiawah’s architectural ethos.

Progressive architecture is not for everyone. But Permar likens it to the Lowcountry marsh. “The marsh is an acquired taste. Its beauty is not initially obvious to people,” he says. “But over time, they start to get it, they start to see it differently. I think modern architecture can be like that.” — H.W.