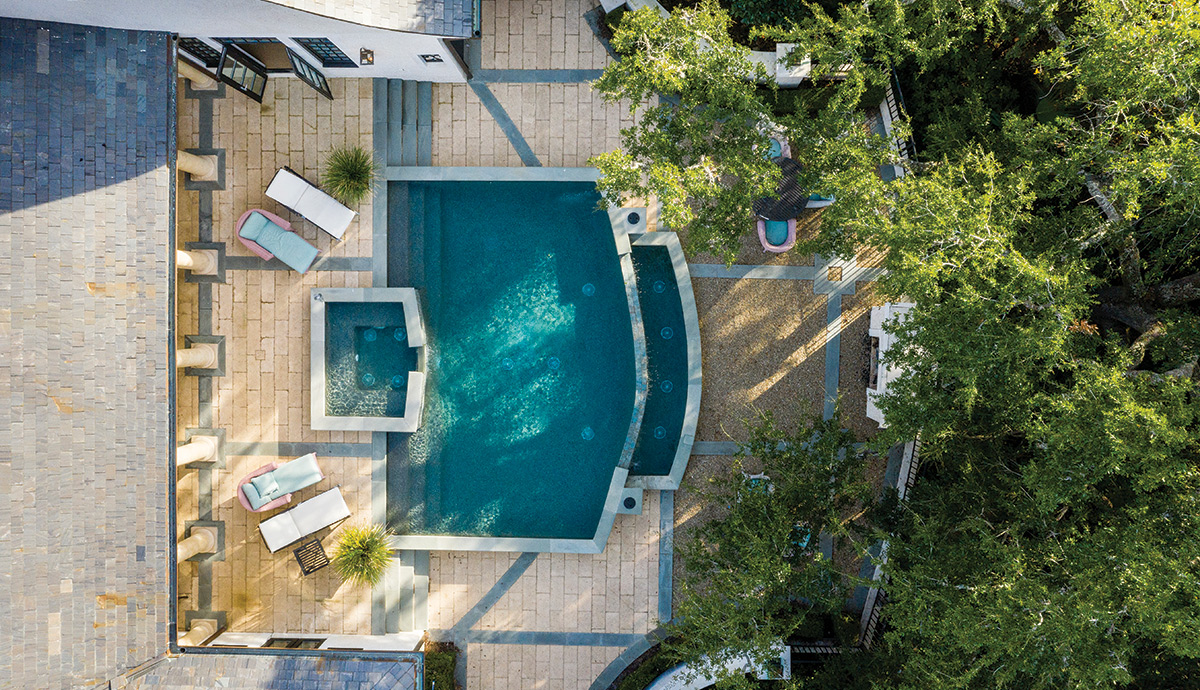 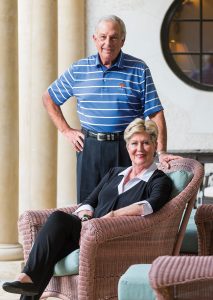 Joan and Jonathan Schochor first visited Kiawah in 1995. With no prior connection to South Carolina or the Lowcountry, their curiosity was piqued when a colleague of Jonathan’s recommended they visit. And after a memorable tour of the island with agent Bob Rummell, they were in love. Rummell took them from homesite to stunning homesite. The Schochors remember walking out onto the back deck of a cottage and seeing dolphins breaching and playing in the creek below. “We were so taken with the beauty of the island. It’s serenity,” remembers Jonathan. “My blood pressure probably went down 20 points just being here.” They were sold. They closed on a lot on Otter Island a month later.

The Schochors hail from the Northeast, a small suburb outside of Baltimore called Lutherville. Jonathan is an attorney and Joan is an interior designer. Kiawah became their haven, a place to getaway with friends and family, to unplug and enjoy nature. Since 1995 they have bought and sold at least twelve properties on the Island. “We tried to count them up the other night,” laughs Joan. “We vary on how many there have been!” They have bought homes and lots, they have renovated and custom-built. They’ve lived on the east end of the island, the west, the middle. Name a property-owner experience on Kiawah, and the Schochors have had it. But in Cassique, they found their forever home. 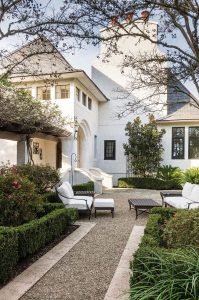 The Cassique Garden Cottages reflect the British Arts and Crafts-style architecture and have all the charm and elegance of a manor in the English countryside. The neighborhood was planned as a built-for-sale concept, with a varied-but-unified aesthetic and one master builder. The Schochors had five options for the footprint of their home. All of the floor plans were designed specifically for the landscape and natural elements of the Cassique neighborhood, with an attention to ocean breezes and seasonal weather. “The floorplan we chose reflected the side entrance piazza seen frequently in Charleston,” says Joan. “The patio area made us feel like we had our own private retreat. It really spoke to us.” The Schochors added a pool to the patio, a disappearing edge that looks out into the shady forest.

For the Schochors, a vital consideration in their search for a home was the natural environment. The lot they chose on Beauty Berry Court had a giant live oak along its western edge. “We knew we were going to site the house with that tree as a focal point,” remembers Joan. Working with the design team, the Schochors positioned the house in concert with the natural elements. The generous, U-shaped floor plan integrates the oak in an intimate embrace. From the street, the 5600-square-foot home feels folded into the landscape, rambling out of view into the dense canopy of maritime forest. This effect, of course, is part and parcel of the Island’s aesthetic. Designing with Nature has been the cornerstone of Kiawah’s master plan since day one. 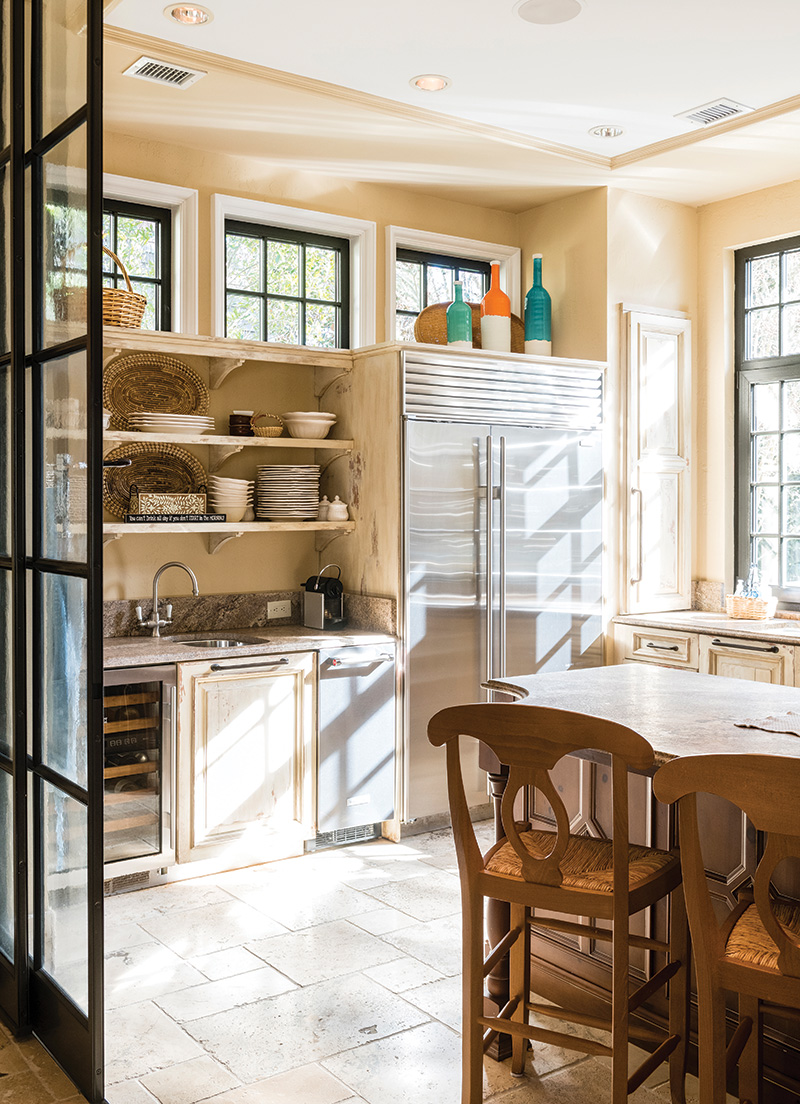 After custom-building, the built-for-sale process was a huge benefit to the Schochors. They “bought off paper”, which gave them a great deal of freedom to make changes before permits were pulled. With the built-for-sale projects, floor plans have been designed and scale aligns with standards set out by the Architectural Review Board. “Starting with a well-defined plan, we were able to personalize in any way we wanted,” says Joan. “Most people might be a bit intimidated by custom-built projects, so this is the best of both worlds.” Not to mention time. The built-for-sale format really accelerates the process. With major permitting and the fundamental floor plan in place, the Schochors had the time, energy, and head space to focus on the more exciting parts of the building process. “I think of it as a head start,” says Jonathan. “We got a feel for the basic spaces, some of which changed pretty dramatically.”

The common misconception is that a built-for-sale home is always a move-in-ready situation. But in many instances, homeowners have the freedom to make quite significant changes to the original plans. In the Schochors’s case, Joan designed the layout for the kitchen, handpicked finishes, and customized the electrical and lighting to accommodate seating areas and large-format art. She even procured all the tile and stone through her favorite Baltimore source.

Walking up the drive of the Schochors’s home transports you to another time and place. A vine-draped pergola casts dappled sunlight on a tabby walkway. A wide, curved exterior door opens onto an expansive patio and pool. A petite pool house (lovingly nicknamed “the Casita” by Joan and Jonathan) sits at the southern end while the main house curves around the opposite end of the outdoor space. And, of course, there’s the tree. Its twisting branches extend over the patio and an outdoor fireplace made of tabby and stone. 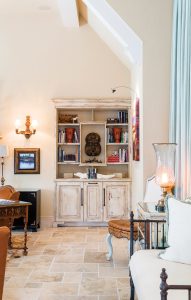 The interior of the house is just as grand. A wide farmhouse kitchen opens into a living and dining space with high ceilings. The Schochors’s plush furnishings and vivid artwork (two of the larger pieces are Joan’s) make the room feel cozy and comfortable in spite of the size. With five sets of French doors opening onto the patio, the house is flooded with light. A furnished space above the three-car garage boasts another two bedrooms and two bathrooms. All in all, the home has five bedrooms and can sleep ten people.

Joan describes her decorating style as transitional, a personal and eclectic blend of no specific era or style. “I feel that you bring more meaning into your surroundings by not limiting yourself to a certain era,” she explains. “There are certain things that just speak to you. Those things should go in your house.” Joan has custom-built over sixty homes alongside architects and builders in the Baltimore area. She is part of the process from the earliest stages, planning spaces and choosing finishing materials for her clients. Her design philosophy is all about comfort, livability. “My work is characterized as comfortable and welcoming. You can’t say anything more flattering to me than that!”

For Jonathan and Joan, their Cassique cottage is the perfect landing place for their two grown children and four grandchildren. The Schochors also entertain friends from out of town and host company retreats. The space is flexible, livable, but also feels roomy and luxurious for a larger crowd. A home should reflect its people. The Schochors have designed a home that communicates who they are, what they care about. They have made their living space and, in a sense, the larger Kiawah experience, their own. — H.W.