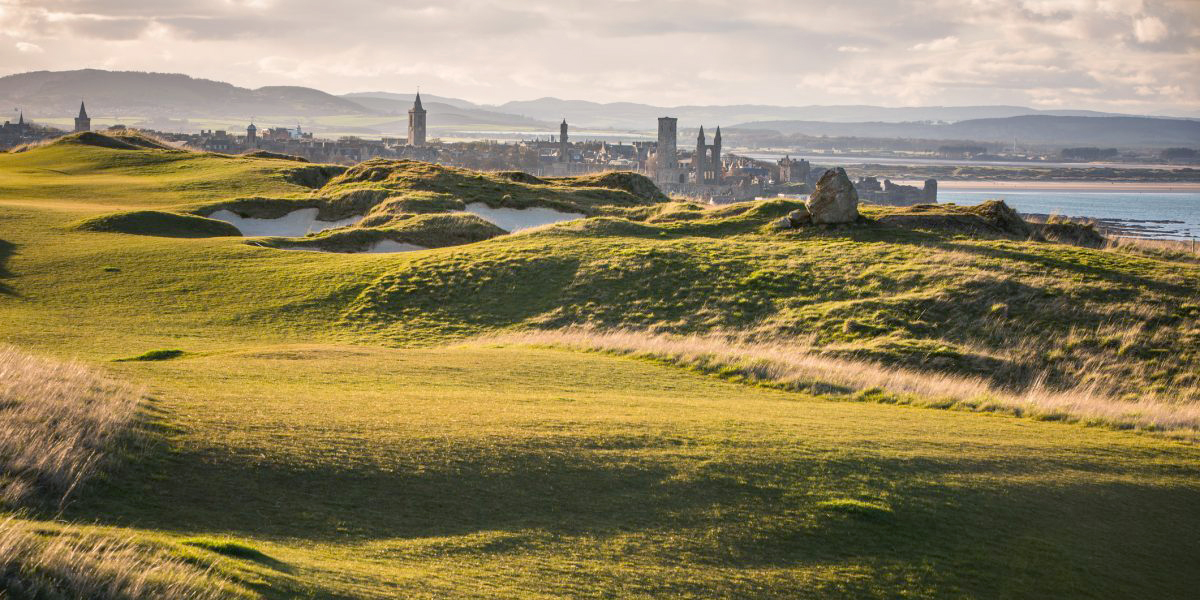 A Look at the World’s Top Links-Style Golf Courses

The game of golf began on the Eastern coast of Scotland. Historically, the first golf course in existence was The Old Course at St. Andrews in Fife, Scotland. As the sport’s popularity grew, courses all over the world began to mimic the unique layout of the rugged Scottish coast by including man-made hills and imported natural materials. These courses are known as “links-style” courses, not to be confused as a true links course, however.

What Makes a True Links Course

The characteristics of what makes a true links course are simple. To be considered, a links course must be set in a coastal area. The course’s design should embrace the natural landscape and hazards of its location to determine the skill-level needed to play. More importantly, man-made elements must be kept to an absolute minimum, with the exception of historical sites such as centuries-old manors or estates.

Above all, the course should have naturally-occurring sand dunes and bunkers, with few trees and an abundance of rolling hills. If you are an avid golfer, you know that this describes most courses in the UK, and most notably, Scotland. In fact, the term “links” is actually Scottish for rising ground, perfectly describing the area’s picturesque coast. While not many courses are true links, links-style courses offer a similar playing feel to the real thing and can be found in other parts of the world, not just the UK.

With jaw-dropping vantage points at every turn, The Ocean Course has made a name for itself since the day of its inception. Pete Dye designed the Course specifically for the 1991 Ryder’s Cup and included as many oceanic views as possible. This Course is known as one of the top links-style courses in the country and beloved by golfers everywhere. For a second time in its history, The Ocean Course will host the 2021 PGA Championship.

Front Nine Lane homes at The Ocean Course offer an incredible opportunity to own property adjacent to this world-famous course.

This private course pays homage to Scotland’s greatest golf courses with its man-made hills and pot bunkers. Some holes offer a bit of Lowcountry feel, thanks to the layered views of marshland and tidal waters. Kiawah Island Club Members play a round at Cassique when they’re looking for a challenging game with a unique layout.

By far the most legendary course on this list, Pebble Beach is a links-style course with narrow fairways and dramatic holes. Like The Ocean Course, Pebble Beach hosts several PGA events each year.

A true links course, Pacific Dunes is just one of a handful of genuine links courses in the United States. Oregon’s cold and rocky coast lends the perfect climate and geography for a beautiful course with fantastic greens.

The second true links course in the country is Highland Links, located on the Northeastern Coast in Massachusetts. It’s said that this course is the most scenic course in the area, with its sweeping views of the Atlantic that go on for miles.

Natural sand dunes and rolling greens come together to create one of the top links-style golf courses around. Along with being touted as a fine course, The Dunes also provides guests with wonderful resort amenities that are characteristic of the all-inclusive resorts within the area.

Deep in the Highlands of Northern Scotland is the Royal Dornoch Club. When playing the Championship Course at Royal Dornoch, you will find hillocks, ridges, and dunes that captivate players from the very first hole. Avid golfers come here, not only to play, but to experience Scotland’s remote ruggedness.

So far, Muirfield has hosted 13 Open Championships, the latest being held in 2013. This course is recognized for its peculiar layout that features two nine-hole courses which loop in opposite directions, thus forcing players to face a different wind direction at each hole.

Ailsa offers an easier play for a bucket list course. It’s a fantastic links course with great caddies ready to help you elevate your golf game. The lighthouse is also a popular attraction that provides historical insight into the ancient locale.

Carnoustie is a historic links course dating back to the early 16th century. The course is often said to be one of the toughest to date, earning the nickname “Car-nasty” by many top players. The weather here can quickly change and create adverse conditions that can become frustrating for even the most advanced player.

In a Seaside town North of Liverpool, England you’ll come across the Royal Birkdale Golf Course that has hosted more professional events than any other course on this list. Head to this course if you are looking for a resort-style course with historical significance on the “Golf Coast” of England.

Situated in the heart of Country Antrim, the Dunluce Links is home to several signature holes including both the ninth and eighteenth, along with the fourth, fifth, and sixteenth holes. Here, you can play undulating fairways with panoramic views of Dunluce Castle and the area’s white sand beaches.

The Old Course was established in 1893 and has remained one of the world’s greatest golf courses since the 1960s. Each hole looks out at the vibrant greenery Ireland is known for, while providing a mental challenge for its players.

A hidden gem in the world of top links-style golf courses, this Dutch course is said to be special and a must-play. Pro tournaments such as the Dutch Open have been played here, showcasing the professionalism of the course’s fairways.

The Dunes at Barnbougle – Bridport, Tasmania

The Dunes is unlike any other course in all of Australia, as it’s the only links-style course available in the entire country. Situated along the North East Coast of Tasmania, the course’s backdrop features seaside hills paired with immaculate fairways that can’t be found elsewhere.

A genuine true links course located in South Africa, Humewood consists of steep-faced bunkers with thick coastal bush and exposed fairways. Players come here when they wish to test their skills and experience the local culture.

With so many incredible golf courses to play around the world, it’s an honor to have some of the very best fairways here on Kiawah Island.