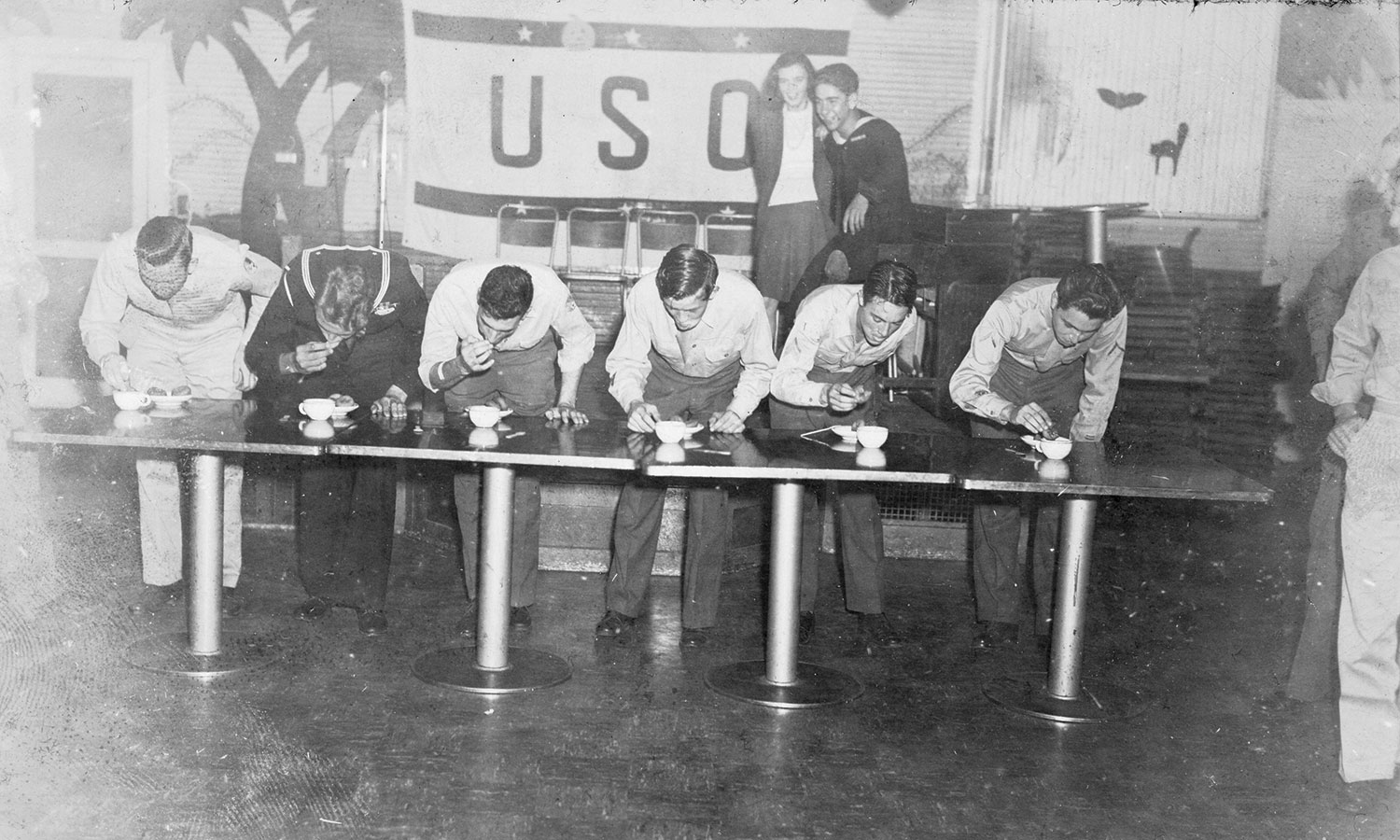 Charleston and the Second World War

Emerging from the Great Depression, Charleston roared into the World War II era, experiencing its largest population boom in decades. Southerners flocked to Charleston’s Navy Yard in a surge of patriotic support for the war effort.

The war boosted a stagnant local economy, with 80 percent of federal defense funding for the entire South coming to the Charleston area. Over 900,000 men trained for service on South Carolina military bases, and 180,000 South Carolinians (2,500 of whom were women) served in the war, in addition to thousands more residents who helped the war effort. Ship builders stationed in North Charleston fabricated state-of-the-art cruisers and destroyers, while satellite industries cropped up to meet munitions and supply demands. Downtown Charleston’s venerable homes were hastily converted into duplexes, Navy headquarters, and even USO facilities where dances took place in formal dining rooms painted battleship gray. As a coastal city, the war came close to home on more than one occasion.

Charleston’s Navy Yard, located ten miles north of the harbor, was busy well before the war, manufacturing and repairing ships at its expansive dry docks on the Cooper River. Its workforce swelled from six thousand in 1941 to nearly twenty-six thousand in 1943. President Franklin Delano Roosevelt (a close friend of Charleston mayor Burnet Maybank) visited the facilities in 1936, where he gave a speech emphasizing Charleston’s strategic location before traveling downtown to address a crowd of over twenty-five thousand at The Citadel campus. During the course of the war, the Navy Yard produced more than three hundred new vessels, built with materials from South Carolina-based steelworks in Sumter and Columbia.

Just as the War Production Board halted all nonessential construction projects, Charleston’s population nearly doubled. Historic houses were quickly carved into apartments, and garages and former stables were converted into additional residences. Stately mansions like the Vanderhorst House (28 Chapel Street, 1832) and the Toomer House (34 Chapel Street, 1840) were divided into rooms for rent. The News and Courier reported in March 1942: “Charleston, traditionally one of the most densely populated cities in the United States, now has not a single vacant house. Houses built for one family are now occupied by two to twenty families.” Later that year, the paper reflected that “since the fateful December 7th of a year ago, Charleston, like other major wartime cities, has assumed a different attitude, cast off its cloak of complacency and donned the spirit of turning out war machines that stand for ultimate victory. From the time that newspapers and radios cried out Japan’s treachery, persons interested in contributing their share to national defense, whether in actual service to their country or through industries engaged in defense work, or in civilian defense, have flocked to the city, swelling the population. The once famous tourists’ resorts are now catering to army and navy personnel and the Fort Sumter hotel, guarded by marines, is army and navy headquarters.” 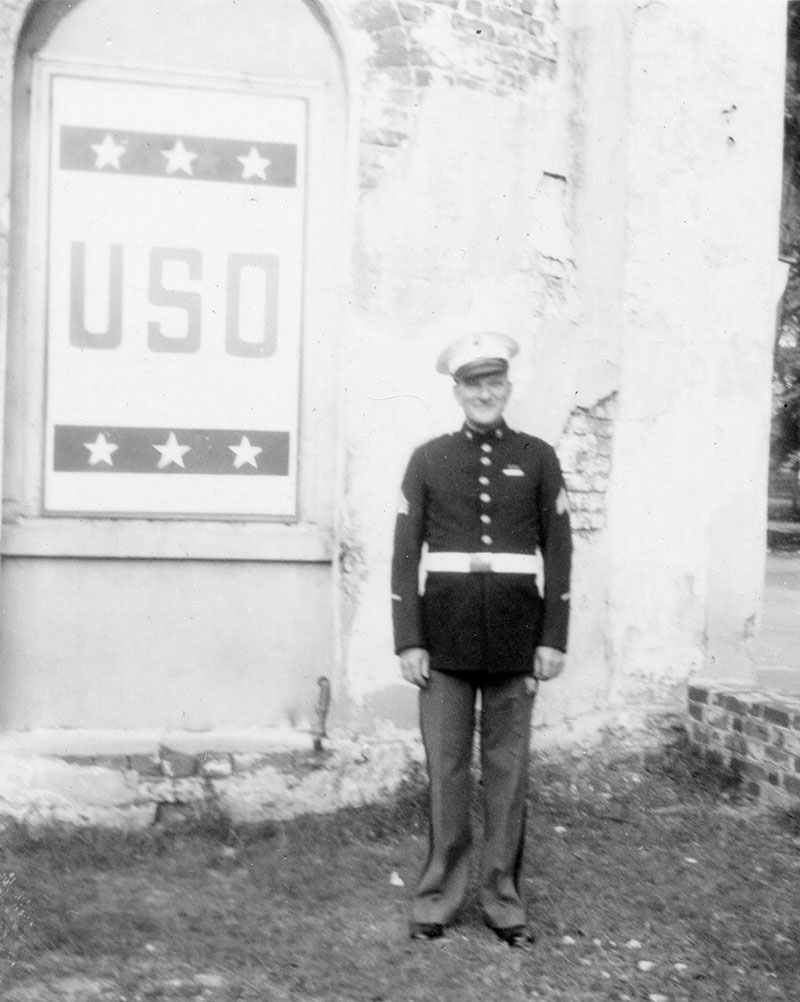 The U.S. military swept through the city purchasing properties. Weyman’s Folly at 340 Meeting Street became a Navy Shore Patrol office. The stately Villa Margherita at 4 South Battery was leased by the United Seamen’s Service, and the Calhoun Mansion on Meeting Street became a boarding house for Army and Navy personnel. Even the Carolina Yacht Club at 50 East Bay Street at the foot of the Battery was converted into a naval officers’ club.

The U.S. Coast Guard leased the Old Exchange building for its offices and bought the old Chisholm Rice Mill building on the west end of Tradd Street to convert to a Coast Guard Station (still an active facility today). West Point Rice Mill at 17 Lockwood Drive became a U.S. Navy station. The Navy also constructed a U.S. Fleet Landing station on Concord Street as an embarking/debarking facility (including seamen who were on their way to the brig for mischievous behavior). The building is one of the most intact vestiges of the World War II era in Charleston and is now a popular waterfront seafood restaurant.

The Joseph Manigault House, a fine Adam style residence built in 1801, became a USO headquarters and Red Cross training facility. Young soldiers attended dinner parties there. They played games like horseshoes and badminton on the lawn and were provided with stationery to write home to their families.

JFK AT THE NAVY HEADQUARTERS

Future president John F. Kennedy was by far the most famous young serviceman to be stationed in Charleston. Many of the places he lived and worked are still extant; his office for the U.S. Office of Naval Intelligence was located in the stately Porcher-Simonds house at 29 East Battery (the side piazzas were enclosed by the Navy during the office conversion). He spent time in the Fort Sumter Hotel at 1 King Street and lived in a garage apartment at the G. Abbott Middleton House at 48 Murray Boulevard. Mrs. Middleton told reporters years later that she remembered Kennedy as “a nice-looking boy who didn’t spend much time around the place.”

The twenty-four-year-old lieutenant likened being stationed in Charleston to “being in Siberia,” so remote was the Southern town from his usual social circles. That is until a young Danish journalist named Inga Arvad arrived in the city to visit. The two had a serious affair. Historian Harlan Greene states that “at night, the eligible young bachelor was often seen with a former Miss Denmark and married woman, Inga Arvad—Mrs. Paul Fejos—although she was ‘Inga-Binga’ to him and he was ‘Honeysuckle’ to her. Kennedy’s father [then ambassador to Great Britain] nearly had an apoplexy when gossip hit the press.”

J. Edgar Hoover, whose strong dislike of the Kennedy family was widely known, suspected Inga as a Nazi spy (she had interviewed Hitler for a paper and he was smitten, dubbing her the “perfect Nordic beauty”). He instructed the FBI to bug the room in the Fort Sumter Hotel where Inga met for her trysts with Kennedy. Inga and JFK seem to have loved one another, and he confided in her about his personal insecurities. Arvad biographer Scott Farris notes, “She spent her time with Jack not just making love and laughing at his jokes but listening to his ambitions in life and assuring him they were within his reach.” Joseph P. Kennedy effectively ended the relationship by reassigning “Jack” to a Pacific ship. JFK later recounted, “They shipped my ass out of town to break us up.”

During World War II, South Carolina had a small Prisoner of War facility in West Ashley that began as an Italian encampment and later became a German internment site. Nearby residents were at first apprehensive about the camps, where prisoners were put to work harvesting crops or cutting pulpwood, but Fritz Hamer explained, “It became clear that the vast majority of these prisoners were glad to be out of the war. They were getting three meals a day, and many like having a different routine [working] out of the camps.” Quarters were rudimentary, and many prisoners lived in tents. A young Coast Guard seaman named Tony Agresta was able to speak some Italian and was assigned to escort the prisoners to Charleston in his jeep. “Agresta and his charges made quite an impression in downtown Charleston, drawing odd looks from other servicemen and girls promenading in sundresses. He took them to a Betty Grable movie at one of the theaters on King Street. Feeling exuberant afterwards, he took them to one of his favorite restaurants and bought them dinner. When they finally got back to the base, he shook their hands and wished them well.”

As a coastal city, the threat of enemy forces patrolling nearby was real and constant. Charleston’s coastal defenses, some constructed as early as the War of 1812, were reactivated. Fort Sumter, Fort Moultrie, and James Island’s Fort Johnson were modernized with new bunkers, weapons emplacements, and observation stations. Fort Moultrie alone had three thousand personnel stationed for coastal defense. Charleston Harbor was even strung with nets to prevent U-boats from creeping up to the city.

In September 1942, Charleston had its closest brush with the German enemy. Captain Hans-Heinrich Giessler wrote in his ship diary that the coastline was well lit and easy to find: “Charleston is recognized as a bright glow on the horizon at a range of 30 nautical miles . . . Charleston light house [Morris Island] burns in peace time.” His submarine U-455 lay in wait for two days hoping to target and sink a merchant ship passing by. U-455 made it within half a mile of the harbor jetties and was never detected, but it planted several mines before retreating back out to the ocean. Four other U-boats were detected in the harbor during the war, and two came close enough that the harbor was closed due to mine threats.

South Carolinians gave much for the war effort—over five thousand died and thousands more were wounded or suffered the loss of a loved one. Lucky veterans returned home to Charleston to start families, and thousands of new residents who had relocated for war work decided to stay.

There are still visible reminders of the World War II era throughout the city today. The U.S. Coast Guard retains its base at the Chisholm Rice Mill, and although the Navy Base closed in 1996 many of the factory buildings, workshops, and residences constructed for the war effort survive and are currently being renovated as the former base experiences a renaissance. Visible from downtown Charleston and docked at the mouth of the Cooper River sits the World War II-era aircraft carrier the Yorktown, crown jewel of a military museum where locals and visitors learn about the heroes and sacrifices of the war, which was felt not only in the bust-to-boom coastal town of Charleston but also across the globe. — C.B.