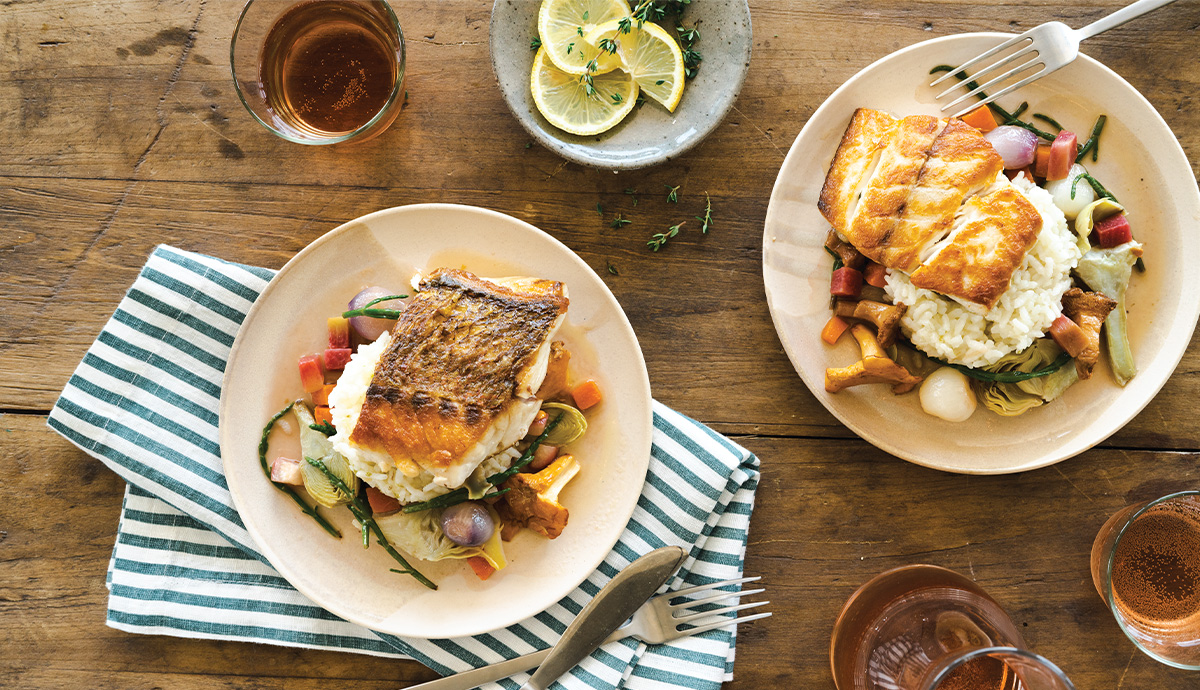 The Kiawah Island Club’s Chef Mike O’Shaughnessy serves up a recipe for two. 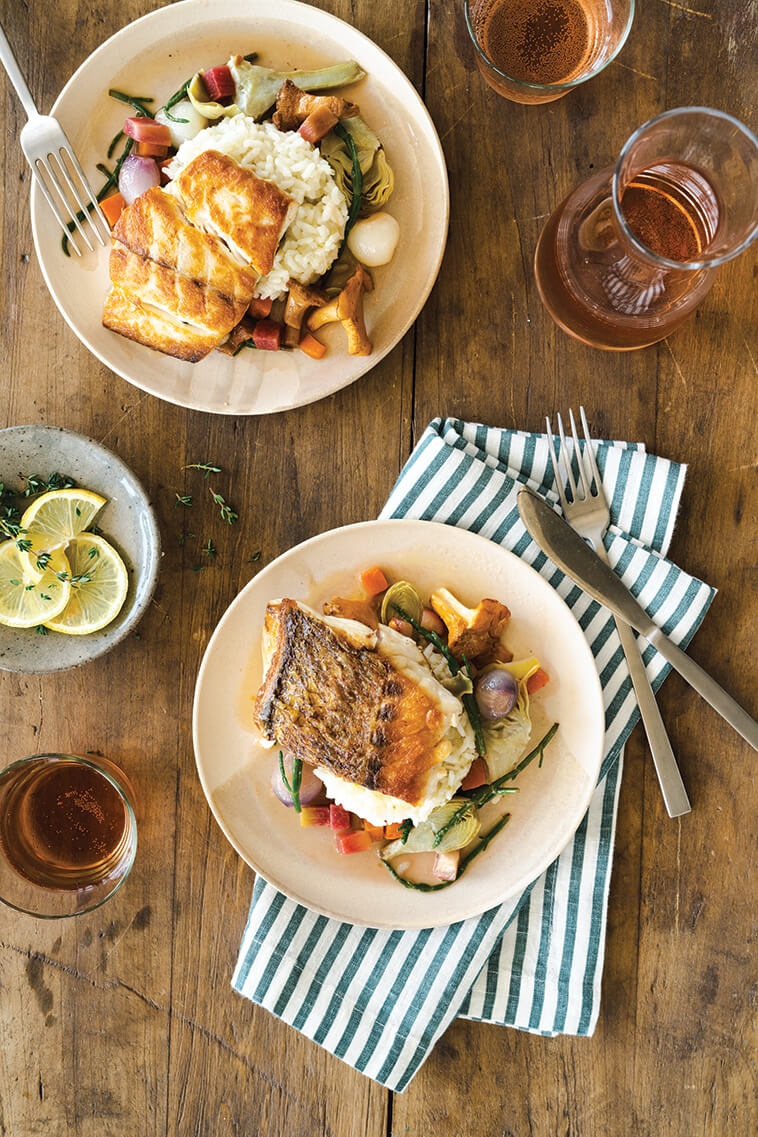 Dry snapper on a clean paper towel. Season with sea salt and white pepper. Heat a medium nonstick sauté pan over medium heat. Add grapeseed oil and allow to heat for a minute. Place the snapper skin side down, applying light pressure until the skin relaxes and allows for even contact. Allow the fish to get golden brown, about 5 minutes, before carefully turning the fillets over to sear the other side for an additional 2 minutes. Add 2 tablespoons of unsalted butter and ½ bunch of fresh thyme to the pan. Once thyme is lightly browned, remove it and continue basting the fish for an additional minute.

Preheat the oven to 350 degrees. Bring six cups of salted water to a boil in a medium sauce pot and add the bay leaf and rice. Cook the rice on a low simmer for 15 minutes before straining the rice out as if it was pasta. Return rice to pot and add 2 tablespoons of unsalted butter and season with black pepper and lime zest. Spread rice onto a baking sheet and place in the oven for 5 minutes just before serving.

Peel and trim artichokes. In a large sauce pot, heat 4 tablespoons of olive oil and lightly brown the carrot, celery, onion, and fennel. Next add garlic, white wine, verjus, water, 3 halved lemons, and cleaned artichokes. Season to taste. Cover the pot and simmer for roughly 30 minutes, or until tender. Chill the cooked artichokes in their braising liquid unless serving immediately.

In a separate medium sauté pan, add one tablespoon of olive oil and roast the pearl onions until slightly transparent. Add diced carrot, watermelon radishes, and chanterelles, and sauté until tender, about 2 minutes. Add the braised artichokes and 2 cups of the artichoke braising liquid. Reduce the liquid by half on top of the vegetables. Finish with 2 tablespoons of butter and the juice of half a lemon, stirring constantly until emulsified. Adjust seasoning and add the blanched sea beans.

Serve the roasted snapper on top of the cooked Carolina Gold rice, spooning the braised vegetables and mushrooms around the plate. Spoon the sauce over the fish and finish with a ½ of a lemon, squeezed. 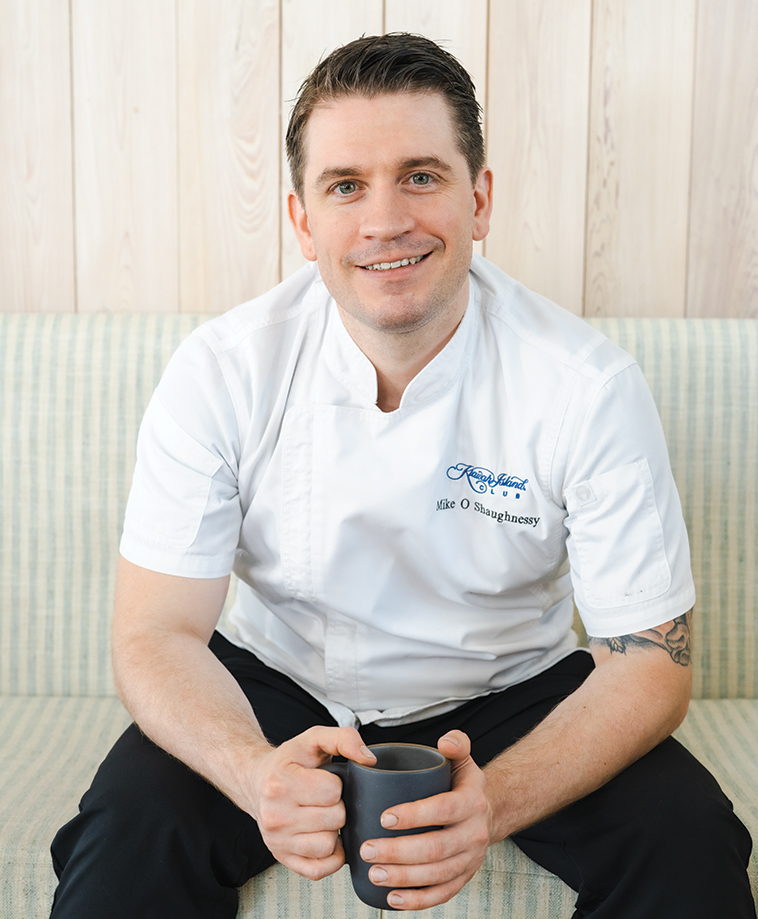 Growing up in an Italian neighborhood in Akron, Ohio, O’Shaughnessy remembers hours in the kitchen watching his father cook. When he started working in kitchens in his early twenties, it was like coming home. After a brief stint as a line cook at Cypress in downtown Charleston, he moved to a Middleton Place restaurant, where he mastered pastry. After a few years, O’Shaughnessy moved to The Sanctuary on Kiawah as an overnight baker. He fell in love with Kiawah, taking a job at Cassique in 2008. For the past thirteen years, O’Shaughnessy has honed an uncompromising dedication to quality. In July of 2021, he became Executive Chef at Voysey’s.