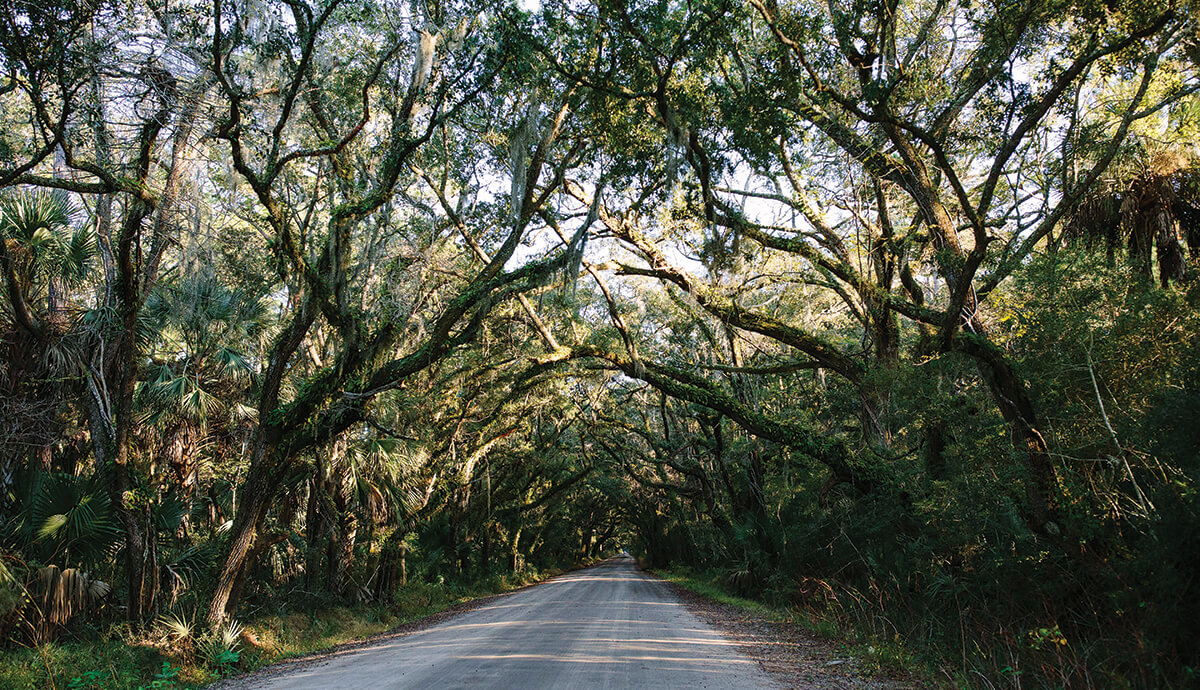 From old-growth swamps to remote shorelines, these six ecological escapes will broaden your perspective of the Lowcountry’s wild side. Each site has a unique cultural and natural history that has been preserved through pointed and direct conservation efforts.

The grand entrance to Botany Bay would be enough for plenty of visitors: A wide dirt road underneath the canopy of centuries-old live oaks makes for a serene, sun-dappled drive in. Once the entrance to the Sea Cloud and Bleak Hall Plantations, it now serves as a welcome to the 4,600-acre preserve that opened to the public in 2008. Once you reach the end of the avenue of oaks, you’ll begin a 6.5-mile driving tour loop of the area’s natural wonders and historical sites.

Pull over at the trailhead of the Pockoy Island Trail, a shell-packed, half-mile pathway that meanders toward the coast through an expanse of marsh. The stroll rewards slow walkers with glimpses of fiddler crabs, flashing butterflies, and egrets making graceful landings in the marsh.

The view opens onto a beach as eerie as it is beautiful—instead of an expanse of sand, the two-mile-long beach is a “boneyard” of sun-bleached trees toppled by an eroding shoreline. Time your walk to avoid high tide, when the beach disappears under water almost completely. As the tide pulls out, you’ll find shells (carbon dating has placed some shells as far back as 4,200 years), shark’s teeth, Native American pottery, and pieces of slave-made brick.

After some treasure hunting (leave all your finds on the sand—it’s illegal to remove shells or artifacts from the beach), drive the rest of the loop to see old tabby structures, agricultural fields now seeded to attract songbirds, a coastal marsh view, brackish ponds, a pine-hardwood forest, and even a kayak launch for ambitious boaters. 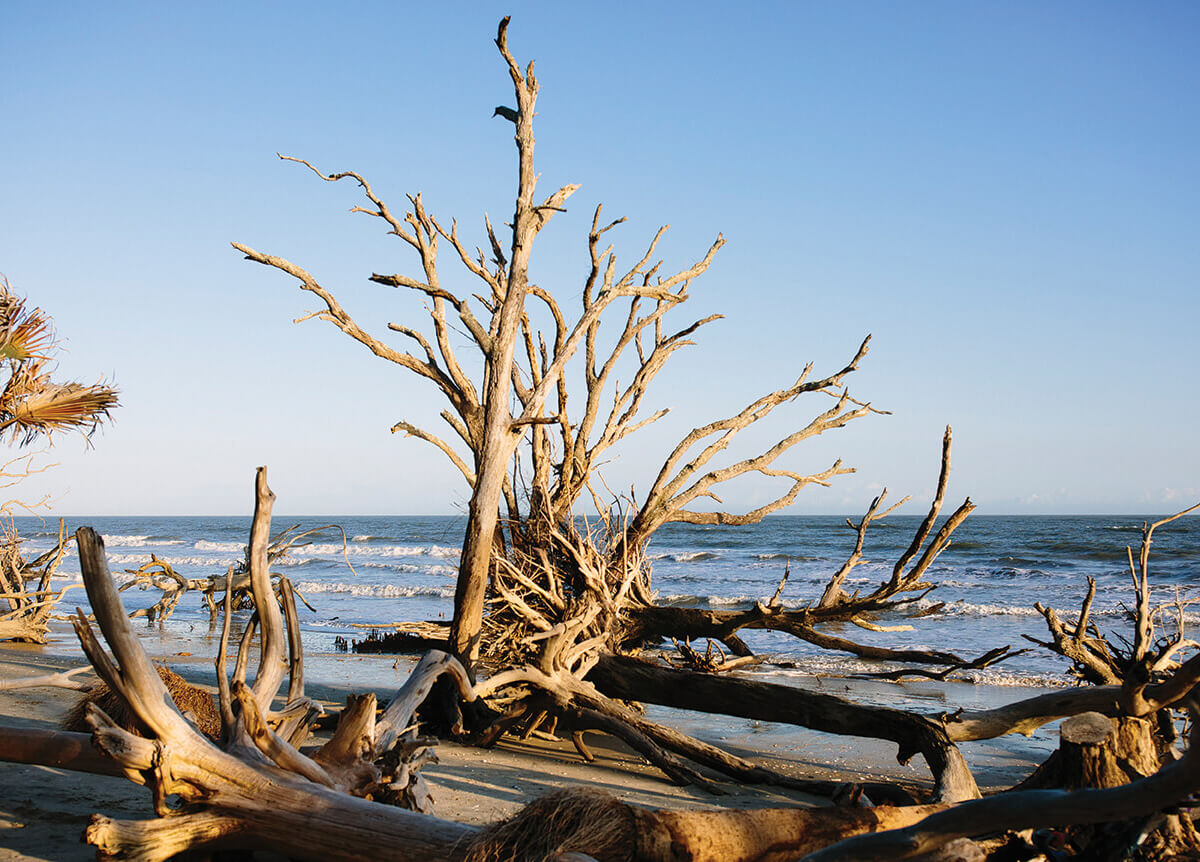 A day trip that doubles as a crash course on South Carolina’s early history, it’s no wonder this site of the historic English settlement along a creek on the west bank of the Ashley River is a destination for school field trips. But go on a day when the classrooms aren’t touring, and you’ll find a peaceful, marsh-adjacent stroll teeming with historical interpretation.

Walk through the visitor’s center, then turn left to see an animal forest featuring species native to South Carolina (mountain lions, black bears, and elk) or veer right to begin a 1.5-mile history trail loop. Picnic areas and scenic overlooks are plentiful on this pathway, which is an interpreted journey through the area’s history, beginning with the original Native American group on the land, the Kiawah.

In April 1670 the English established “Charles Towne” at this Kiawah tribal village at Albemarle Point, before relocating to where modern Charleston is today. A demonstration garden along the history trail features examples of early crops the settlers attempted to farm here, such as sugar cane and indigo. (Most of the early experiments failed and it would be twenty years before the settlers discovered the profitability of cultivating rice.) Replicas of original structures, such as slave dwellings and fortification walls equipped with cannons, add an element of imagination, culminating in the recreation of a seventeenth-century trading vessel that would have brought raw materials, enslaved people, and news from home to the colony’s original settlers. 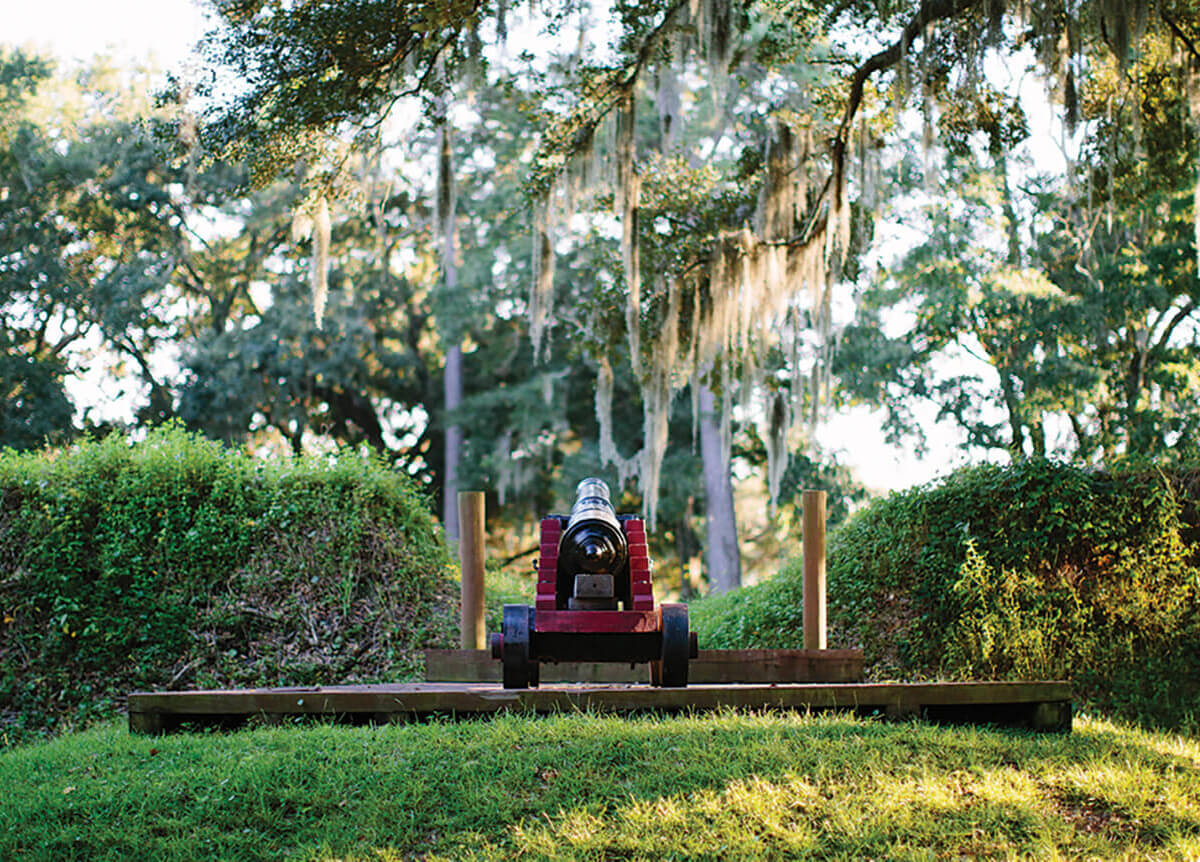 The blackwater swamp, dense with bald cypress and tupelo trees, is at the center of this 170-acre preserve. Paddle a flat-bottomed swamp boat (available for free) along a marked trail, looking at lily pads, turtles, and birds as you glide between cypress “knees,” the looping roots that protrude above the water’s surface. If it feels eerily familiar, it may be a spark of recognition from its cameo as a location in movies like The Notebook and The Patriot. The romance is interrupted only by glimpses of what may be the bumpy nose of an alligator—or just another sunken log.

If, however, you are in the mood for a guaranteed reptile sighting, the small indoor “swamparium” houses all manner of swamp life, from snakes to salamanders, for more up-close and personal viewings. Nearby, the 2,500-square-foot butterfly house celebrates local flora that support the life cycle of a butterfly, complete with illustrations and education on every phase.

Like everything else in Charleston, the expansive and inviting attraction is not without history. Originally part of Dean Hall, one of the Cooper River’s largest rice plantations, the park was created in the late 1920s and officially opened in 1932. Hurricane Hugo nearly destroyed Cypress Gardens in 1989, and then, in October 2015, historic flooding submerged the entire park under four feet of standing water and it closed for almost five years. But, more than two million dollars of renovations and repairs later, it is once again open to the public. 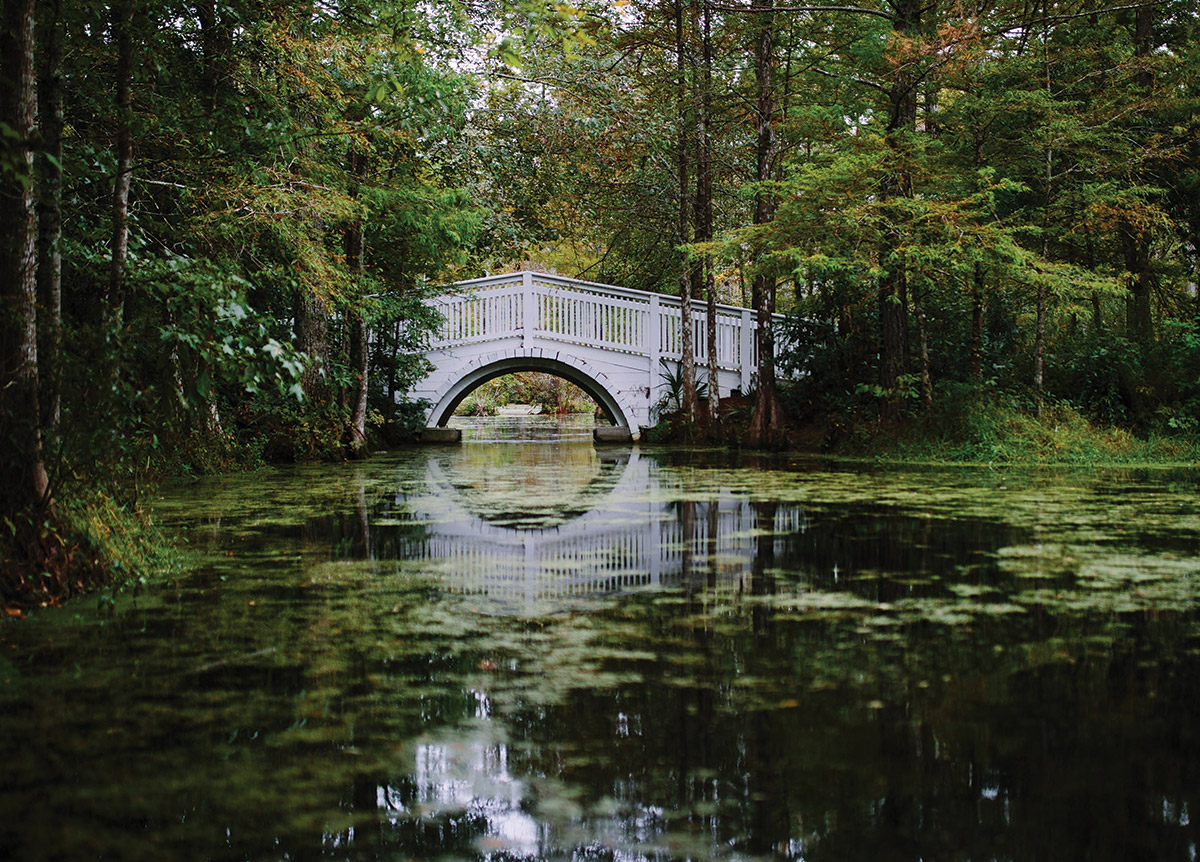 Perhaps the most iconic image of Hunting Island, the 5,000-acre barrier island near Beaufort, is the 163-year-old black-and-white painted lighthouse. Perched on a grassy knoll, it is the only publicly accessible lighthouse in the state of South Carolina, and it has been uniquely engineered to survive here: It was built to be easily dismantled, moved, and reassembled as the barrier island erodes. (It has already been moved once, in 1889, more than a mile inland.)

Visitors can climb the 175 steps inside the lighthouse for an unrivaled coastal view, but locals know that the real secret here is the eight miles of trails winding through a smorgasbord of lowcountry ecosystems. In a single 1.5-mile stroll at the south end of the park, you’ll start at a bustling, beloved fishing pier that extends into the ocean for three hundred yards, then pass through a semitropical maritime forest, only to be released across a pedestrian bridge over a saltwater lagoon. From there, you’ll continue to stroll along the small strip of beach while bald eagles and osprey glide into their nests above you. The beach is bordered on one side by towering palmettos jutting up against the fine white sand and, on the other, a panorama of fallen trees that the ocean’s waves are slowly, steadily turning into driftwood.

In true barrier island fashion, the landscape is ever-evolving: After Hurricane Matthew hit the island in 2016, the ocean breached the lagoon, cutting the beach expanse in two and creating “Little Hunting Island,” which can be accessed only by foot. If the dynamic nature of the place tempts you to stay for more than a day trip, consider one of the tent, RV, or primitive camping spots available on site. 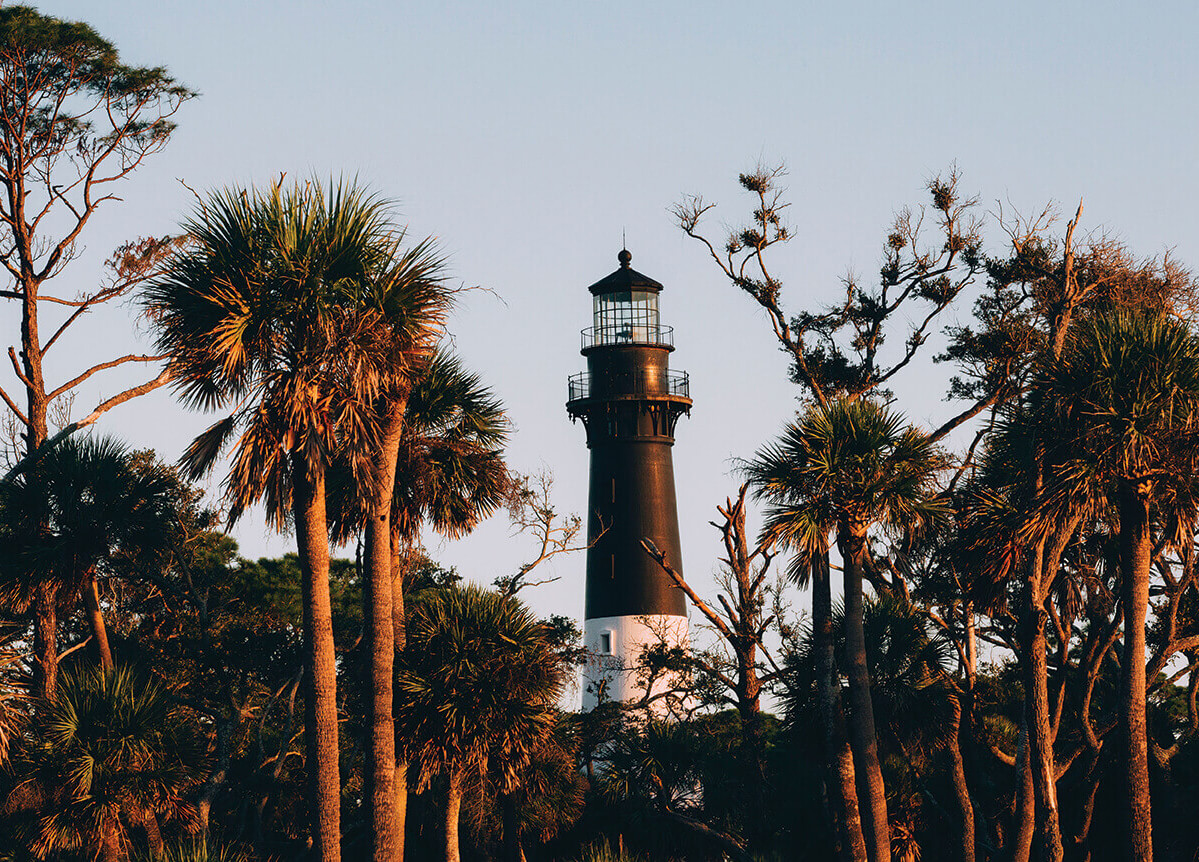 As you begin to stroll the 1.75-mile elevated boardwalk loop through Beidler Forest, you might mistake the peaceful soundscape of the world’s largest virgin cypress-tupelo swamp for silence. After a few minutes, you’ll realize what you’re hearing isn’t actually silence at all: periodic flutters of white ibis wings, woodpeckers, even the gentle dip of water snakes around cypress knees, and dampened steps of deer in the swamp become a chorus of natural noises that will transport you to a more primitive version of South Carolina.

Along the loop you’ll inevitably come to appreciate the critical function of these wetlands, which act as a sponge to prevent downstream flooding and provide diverse habitats for wildlife. The acreage, owned and managed by the Audubon Society, is just a portion of the larger Four Holes blackwater swamp, so named because the tannins from decaying tree leaves turn the water a steeped-tea black. This clean and nutrient-rich water is vital for protecting the Edisto River, which the swamplands slowly feed.

Beidler Forest is home to small yet stunning ornithological miracles, like the two thousand pairs of prothonotary warblers that return from their five thousand-mile migration on the same week each spring to nest in tree cavities of the tupelo gum and bald cypress trees.

The landscape is also steeped in history: Beidler Forest was recently recognized as a site on the Underground Railroad for the so-called “marooned communities,” which sought refuge in the swamp after escaping bondage. They set up encampments near dwarf palmettos, which flooded less frequently, and built low-impact encampments they could abandon at a moment’s notice. 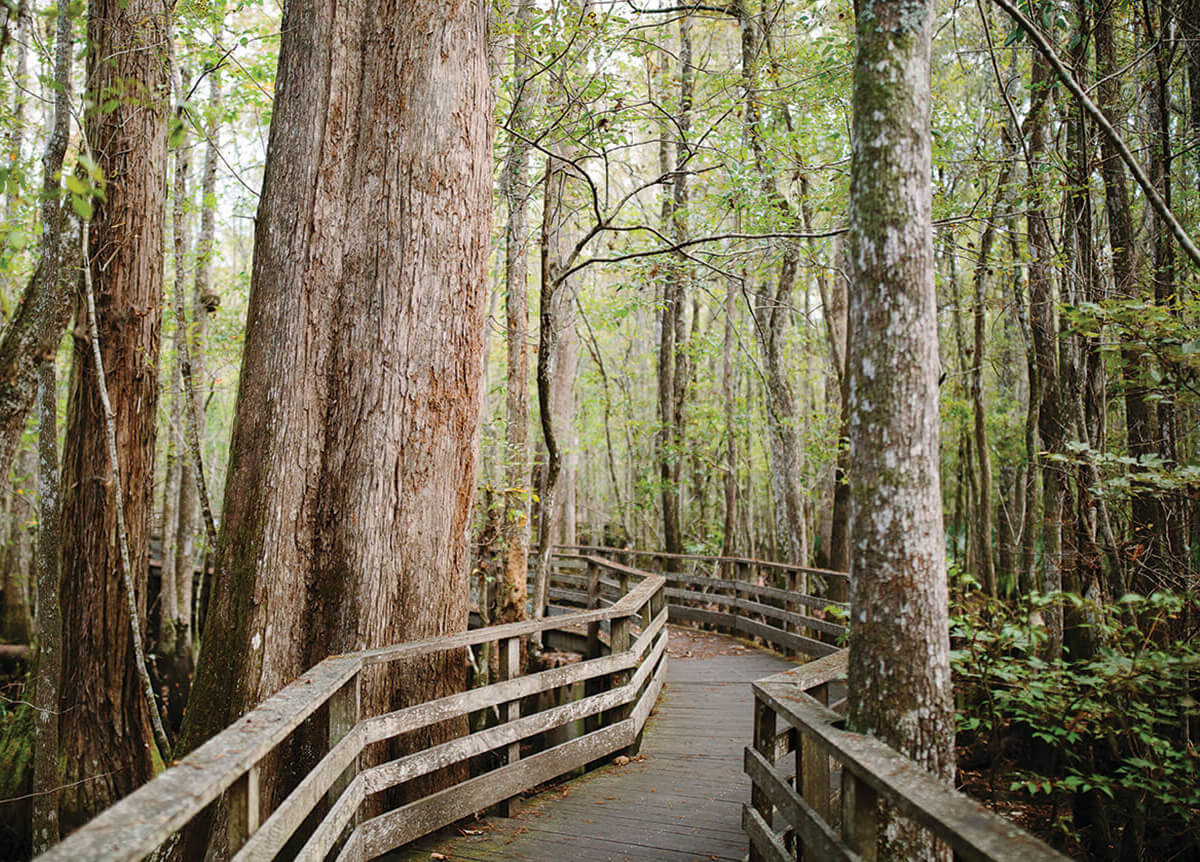 The Lowcountry has no shortage of eighteenth-century rice plantations, but few stand out the way Middleton Place does. A national historic landmark and home to some of the oldest landscaped gardens in America, Middleton Place focuses on storytelling and interpretation of the place through the lives of the people who lived there. But instead of the typical narrative, focusing solely on plantation owners (Middleton Place was home to two Founding Fathers), visitors also can get a glimpse into the lives of the enslaved laborers who made Middleton Place possible. While a house museum filled with Middleton family artifacts (first-edition works of John James Audubon, pre-Revolutionary furniture, and personal notes and letters) tells one side of the story, and Eliza’s House, a freedman’s dwelling on the property, offers another from the perspective of some of the 3,500 enslaved people the Middleton family owned. The unique interpretation is a result of intensive research by staff historians, parsing through the few records or artifacts the enslaved left behind, and links with the living descendants, both black and white, that the site maintains.

Do a guided tour (daily at the top the hour) to get the full picture before taking a walk through the tree-lined allées of the gardens, where the rigorous upkeep of each symmetrical landscape and tidy topiary is juxtaposed against crumbling remains of the original building, burnt just months before the end of the Civil War. As you reach the end of the plantation, the formal gardens give way to the wild and reflective banks of the Ashley River, reminding you that the timelessness of Lowcountry beauty is, and always will be, the natural landscape. — M.W. 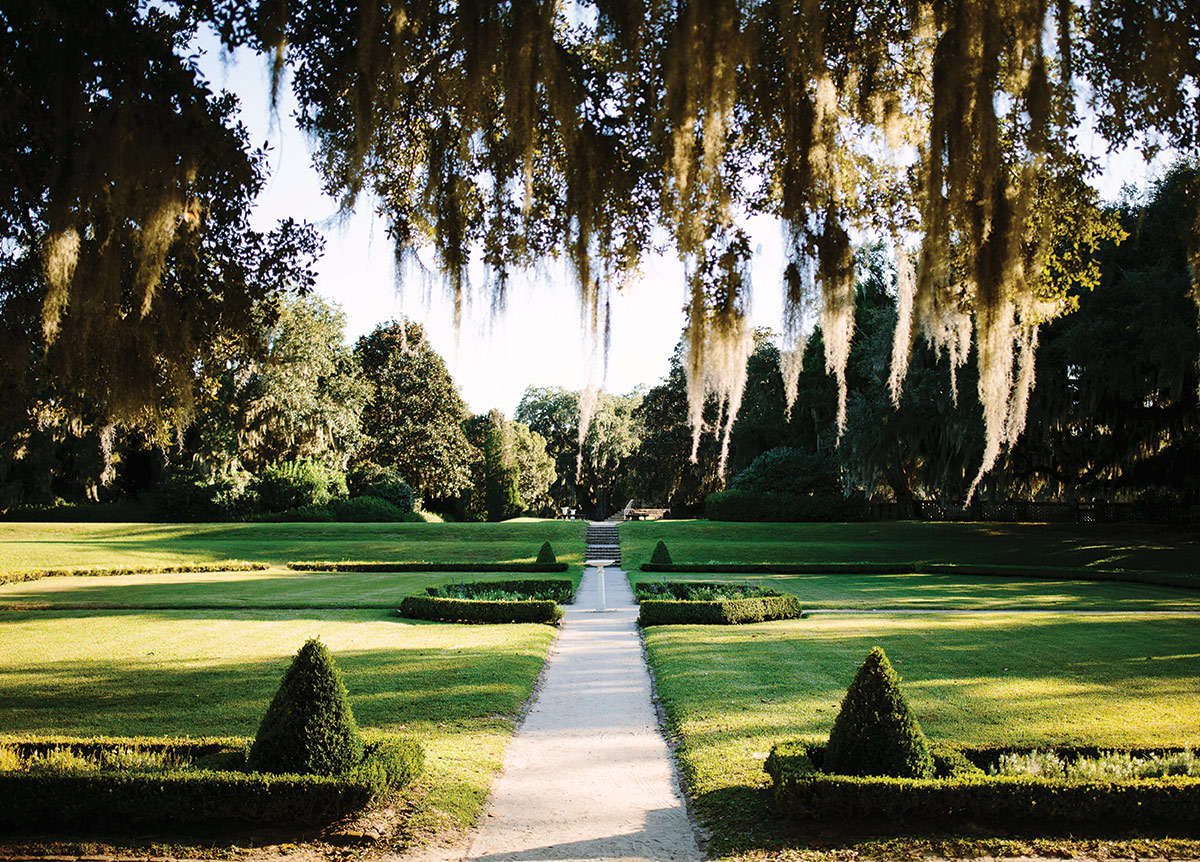