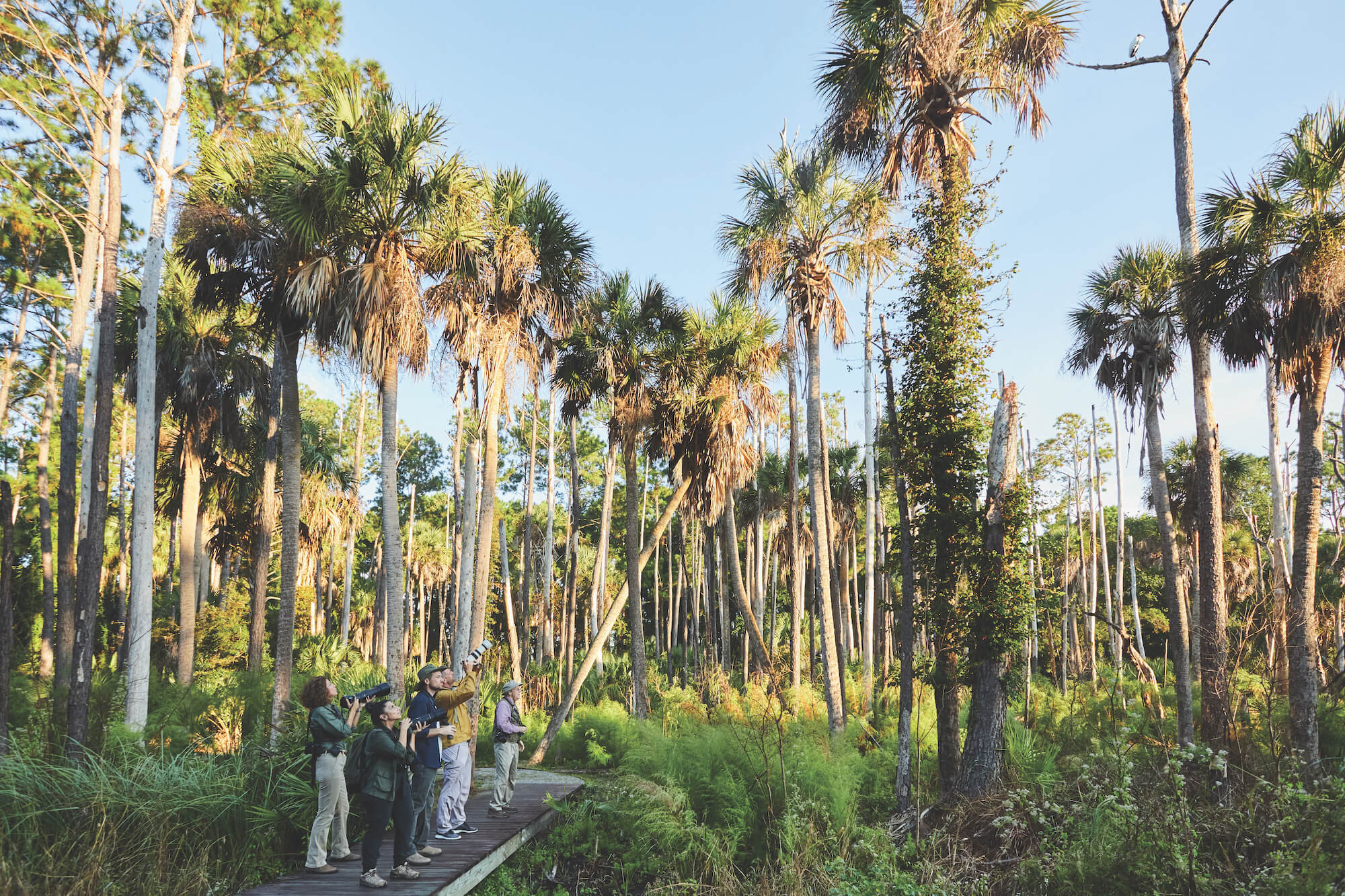 As autumn comes to the northern hemisphere, immense flocks of birds take flight and begin their long journey south in numbers so vast that their movement can be tracked by radar. As the marsh grasses turn golden, shorter and colder days signal the arrival of wave upon wave of magnificent birds to the Sea Islands. 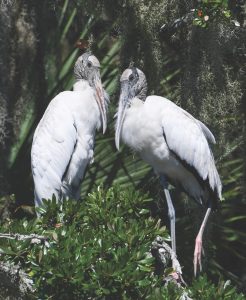 Did you know? Wood Stork
The only native stork in North America, the wood stork is huge (can be almost 4’ tall!). Recognizable by their long legs, mostly white body, and very heavy bill, the wood stork soars high on sunny days and wades in the shallows of southern swamps. They are revered in Greek, Chinese, and European mythologies as good luck and harbingers of spring and birth.

South Carolina’s barrier islands are an essential stopover for these winged travelers as they journey, sometimes many thousands of miles, to far-flung overwintering sites in the Caribbean, South America, and beyond. In the spring, this dramatic migration happens in reverse, the salt marsh again becoming inundated with shorebirds of all shapes and sizes—from piping plovers to American oystercatchers—eager to arrive at their breeding grounds to rear their young. Known as the Atlantic Flyway, this migratory route starts as far north as Greenland and follows the Atlantic coastline southward, encompassing some of the hemisphere’s most productive ecosystems and providing food, water, and shelter for these weary travelers.

Kiawah Island and the surrounding barrier islands play a crucial role in ensuring this avian migration continues successfully into the future. Surrounded by ocean and vast salt marshes, Kiawah’s brackish ponds, lush maritime forest, and picturesque dunes provide much-needed nesting sites and habitat for a wide range of birdlife. Additionally, at the convergence of the Folly, Stono, and Kiawah Rivers lies Bird Key Sanctuary, a thirty-five-acre sandy preserve designated a sanctuary in 2006. This small island—along with Deveaux Bank off Edisto Island and Crab Bank in the Charleston Harbor—is an undisturbed breeding ground for brown pelicans, laughing gulls, royal terns, and snowy egrets, to name a few species. Setting aside these three spits of land ensured an enormous number of birds would have a place to rest and feed that was free of predators and undisturbed by human traffic.

Renowned for its natural beauty and abundant wildlife, places like Kiawah Island are increasingly rare along the Atlantic Coast. Kiawah is fortunate to have the Kiawah Conservancy, a nonprofit started by residents in 1997 with the express mission of preserving the Island’s natural environment as well as the restoration of habitat required to maintain a healthy and balanced population of native plants and animals. 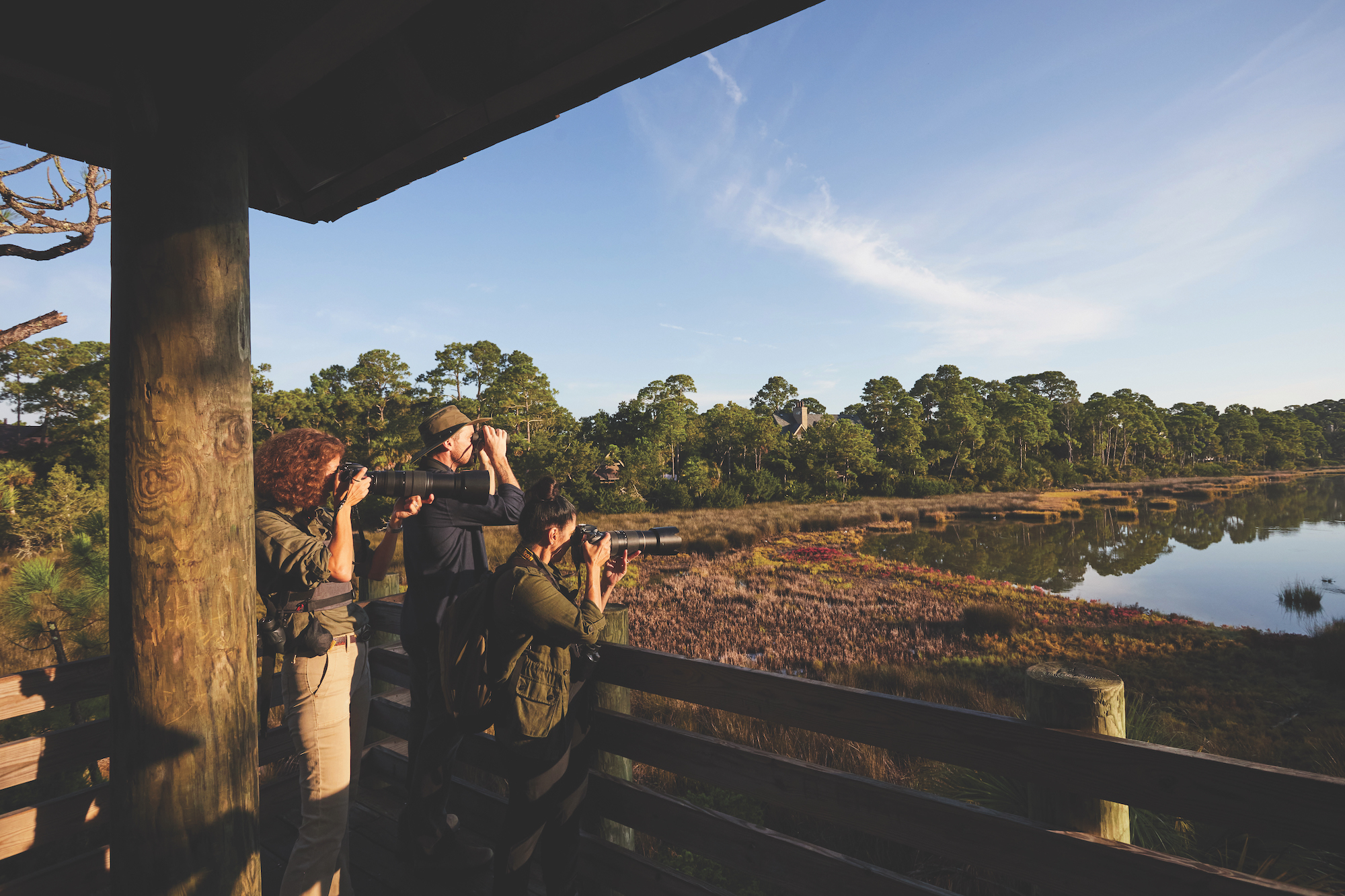 Early one morning in October, a group of bird enthusiasts gather at the Cinder Creek Pavilion. I arrive early and stroll out on the dock to the covered area, admiring the way the rising sun colors distant thunderheads a soft pink. A pair of kingfishers play chase along the glassy surface of the creek, pausing to unleash their wild rattling call as they hover midair. Majestic great egrets flap lazily along the treeline, effortlessly kept aloft by their enormous wingspan. It’s one of those perfect Kiawah mornings, impossibly beautiful and full of life.

It’s an eclectic group that assembles. Ages span four decades, backgrounds ranging from retired bankers to professional wildlife photographers, all drawn together by a shared fascination with birds. Bob Hill, avid cyclist and the most senior of our group, has been photographing birds on Kiawah for decades and has a running catalog of over 120 species. Pamela Cohen, professional photographer and trained field biologist, brings an impressive wealth of knowledge to the group, explaining peculiar bird behavior in various situations. Marc Fetten is a self-proclaimed raptor guy, recounting stories of photographing birds of prey mid-dive. 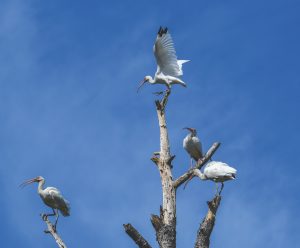 Did you know? White Ibis
These large wading birds are highly sociable, foraging in large groups. feeding on insects and crustaceans in freshwater marshes, coastal estuaries, mangroves, and swamps. The ibis can fly up to thirty miles an hour! In folklore, the ibis is the last to seek shelter before a storm and the first to emerge afterwards, thus a dual symbol of danger and optimism.

Crossing the road, we begin making our way toward Blue Heron Pond. Almost immediately we stop in our tracks. Arms raise and we squint through binoculars and cameras at a stand of loblolly pine literally crawling with birds. Shutters softly click as a group of giant wood storks settle in the bare branches of a tall snag to soak up the morning sun, white wings folded and bald heads downcast as if in quiet meditation. A small flock of eastern bluebirds blow through, landing briefly in the trees before continuing on their warbling way, calls fading with them. Two red-bellied woodpeckers tap out a staccato on a single pine, amidst the chattering of Carolina chickadees. We whirl, our attention captured by the loud cuk-cuk-cuk-cuk! call of North America’s largest woodpecker. Nearly a foot-and-a-half tall, of Woody the Woodpecker fame, the pileated woodpecker sports an amazing red crest with dramatic black-and-white markings on its face.

Today’s gathering was orchestrated by Charleston native and wildlife photographer Cacky Rivers. A tall and magnetic person, her dark halo of curly hair shines copper in the sun, and a gleam in her eye betrays her excitement for this beautiful morning. Dressed in dark green and khaki and toting an enormous camera and lens, Rivers leads us down a soft dirt path lined by oaks and palmettos. Growing up in Charleston, Rivers’s father, Dr. Thomas Rivers, was a well-respected family physician and accomplished outdoorsman. Rivers credits her father as having had a huge impact on her love affair with wildlife, nature, and especially birds. When Rivers graduated from college she received a Peterson Field Guide to Birds book and a pair of binoculars from her father. The rest is history.

The low-angle morning sun cuts through the tops of the pine trees on the south side, leaving half the pond in mirrored shadow, the other half bathed in glorious gold. 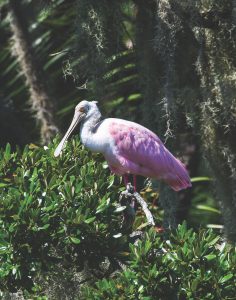 Did you know? Roseate Spoonbill
The roseate spoonbill, or Platalea ajaja, is recognized by a big spatulate bill and bright pink plumage! Spoonbills feed in shallow waters, walking forward slowly sifting muck with their wide flat bills. They feed on crustaceans that contain carotenoid pigments that turn their feathers pink.

Emerging from the forest, we climb the spiral staircase of Blue Heron Pond observation tower.  The low-angle morning sun cuts through the tops of the pine trees on the south side, leaving half the pond in mirrored shadow, the other half bathed in glorious gold.  Tricolored herons stalk the quiet, shallow waters on the edge of the pond. Strikingly slender with a long bill, they wade belly deep in search of fish. We laugh from our elevated vantage, watching a juvenile moving much more quickly and less effectively than its older counterparts. It seems patience comes with age for birds too.

As we walk, the talk turns to habitat and migrant birds. Much is made of the recent appearance of roseate spoonbills on the Island. With bright pink plumage, greenish heads, and long bills that widen roundly at the end—giving them their name, “spoonbill”—, these birds are sure to garner attention. “Gorgeous at a distance and bizarre up close” reads one description of the peculiar wading birds. Similar in color to flamingos but for some reason far more obscure, I’m struck by how amazing it is that they too make their way to Kiawah, a particularly unusual character amidst the cacophony of exotic birdlife on this beautiful island.

A narrow boardwalk spans the pond, and we make our way to its center as an osprey wheels overhead and lands in a nearby pine.

A sandy path through the maritime forest brings us to Killdeer Pond. The day is beginning to warm and dew beads on silvery spiderwebs suspended in the spartina grass along the pond’s shore. A narrow boardwalk spans the pond, and we make our way to its center as an osprey wheels overhead and lands in a nearby pine. Far off at the end of the pond the white head of a large bald eagle gleams in the morning son. Dropping from its perch, the eagle flies directly above us, Marc at the ready takes photos rapid-fire.

The group splinters into pairs and threes and begins drifting back toward Cinder Creek, lost in conversation. Crossing over a narrow ribbon of marsh, it’s quite the surprise to see a young buck making its way toward us along the boardwalk. Lowering his head coyly, he occasionally slows but doesn’t stop until he’s within five feet of Rivers. Typical traffic along the Killdeer Trail?

We finish with breakfast under the Cinder Creek Pavilion, celebrating a good morning spent doing what we all love with pastries, fruit, and refreshing mimosas. The view down creek is nothing but marsh and a few long docks, a Lowcountry scene no less beautiful for its familiarity. We swap stories and show favorite bird photos on phones and on the backs of cameras. There has been a rumor of a white-faced ibis on the island, and Bob is the only one who has seen it. We split up after breakfast, heading to work or home to our families. Bob and Cacky head off together in search of  spoonbills. 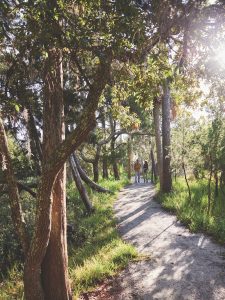 Research on the Island

Kiawah also plays a role as an important site for bird research. Aaron Given, one of Kiawah’s wildlife biologists, has been monitoring fall migrations for the past thirteen years. Given catches songbirds in mist nets, records their overall health and places a small metal band with a unique number on one leg before releasing them. This is an important way to monitor populations of various species along the Atlantic Flyway. Since 2009, Given has also performed a “breeding bird count” annually. Over the course of nine early mornings, he visits 238 individual spots on the island—from tip to tip—each for five minutes. Sitting quietly he identifies birds primarily by sound but also by sight, and records his observations. He is currently working through the data to see how individual species have fared over the past thirteen years.