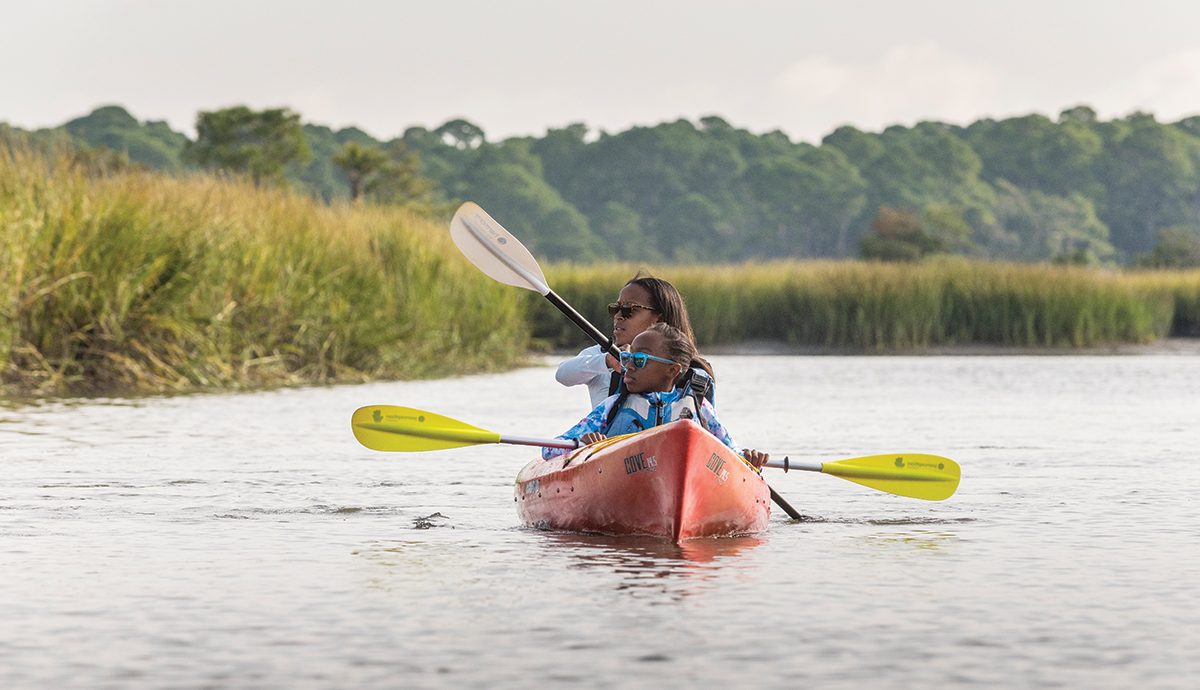 Surrounded by salt marsh, tidal creeks, and the Atlantic Ocean, Kiawah still feels a bit wild. And the best way to explore the mysteries of the Island is by kayak.

Kayaking Kiawah is all about timing. Ideally, you’re working with the tide to take you on your journey. Ebb tide is when the tide is leaving. Flood tide is when it’s coming in. If you’re exploring some of the narrower creeks, do it on a flood tide. That way, if you get stuck, you just wait a bit for more water. The closer the moon is to the earth, the higher the highs, the lower the lows. There can be as much as a three-foot difference between one low tide and another. King tides are the highest tides and happen up to eight times a year. During a king tide, as much as eight-and-a-half feet of water will move through the system in the six-hour-and-fifteen-minute tidal change. 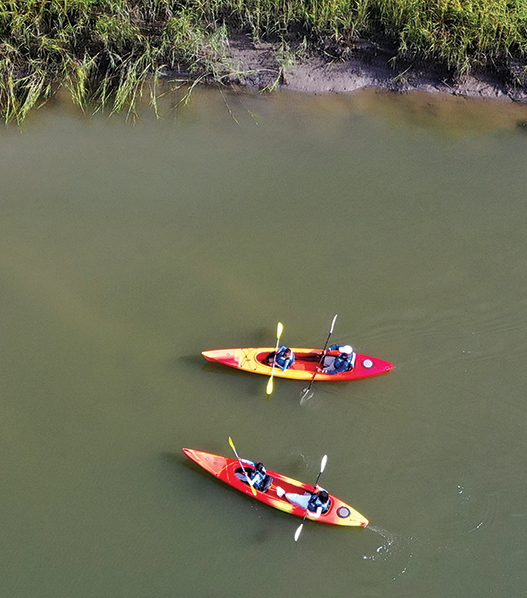 During high tide and low tide the water is slack. There are approximately six hours and fifteen minutes in between the tides. During the first hour, one-twelfth of the water moves through, two-twelfths during the second hour, three-twelfths during the third hour, and so on. Keep in mind, mid-tide is the strongest current. There is always less current along the bank than in the middle of a channel. When you narrow the width of the water, the current picks up tremendously. If you find yourself paddling against the current, stay close to the shore.

Check the weather forecast before heading out for a paddle. Pay special attention to how many knots the wind is blowing and in what direction. Anything above twelve miles per hour is going to make for an unpleasant experience.

Keep your back straight! A straight back makes for more efficient paddle strokes and makes it harder to capsize.

Kiawah Island and the surrounding barrier islands offer an abundant food source for dolphins. The local Kiawah River pod sticks around all year, but in the fall and winter months, migratory pods come from the north. Please stay fifty to one hundred yards away from dolphins, one hundred and fifty yards if you see a mother and calf. If a dolphin approaches you, take your paddles out of the water.

Jacques Cousteau was the first to document the extraordinary phenomenon in the early seventies on Hilton Head. It happens along Cinder Creek and Bass Creek. The dolphins corral baitfish, and they push a wall of water with the baitfish up on the bank. They always lay on their right side, and they completely strand themselves. This is a learned skill and only happens in a few places in the world!

Look out for black skimmers, gulls, terns, egrets, and herons as well as bald eagles, ospreys, and belted kingfishers. And in the summertime, you might see a pink roseate spoonbill!

The water in the back barrier nears ninety degrees in the summertime and forms algae and plankton. (Note the reddish color? It’s these nutrients!) Baitfish come in to feed off of the plankton. And then everything else comes in to feed off the baitfish, including the top predator—dolphins. Shrimp grow in these protected creeks, too. At extreme low tides shrimp might jump in your kayak! In the fall they move out toward the deeper water.

EXPLORING THE EAST END OF KIAWAH

Launch from the member boathouse at the Cinder Creek Pavilion. On a high tide, paddle west into the interior of the island. These secluded creeks are the best place to see wildlife. On a lower tide, head toward Bass Creek and out toward the Stono River. 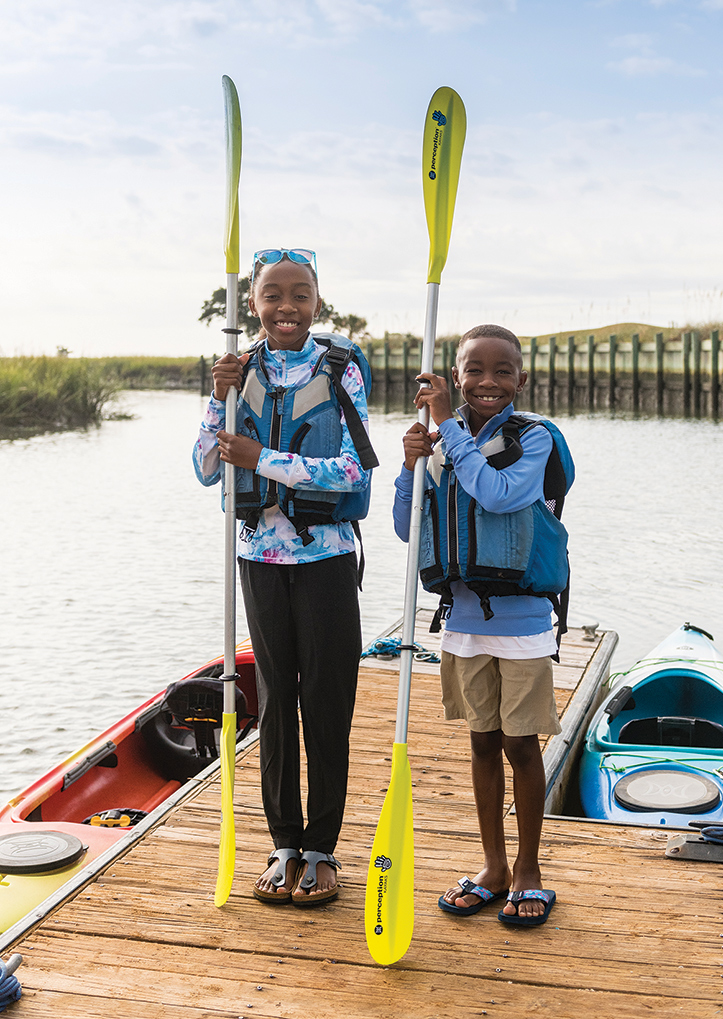 Launch at Rhett’s Bluff. The Kiawah River is a more aggressive paddle on a windy day. Cross to the opposite bank from the boat launch and explore the oyster beds along the shore. If it’s a flood tide, this is a great place to see shorebirds and diving birds feeding off baitfish.

The Cassique Boathouse, open to Members, is located on Oyster Creek, a small tidal inlet off the Kiawah River and adjacent to the fifteenth green of Cassique Golf Course. Reserve your kayaks through the Sports Pavilion, and the staff will choose the best route based on time and tides. If you’re not into kayaking, the Cassique Boathouse offers stand up paddleboards. Prefer to fish? Check out the specially equipped angler kayaks and BOTE boards. And don’t forget to fuel up before your paddle at the attached comfort station!

EXPLORING THE WEST END OF KIAWAH

Five routes launch out of the Cassique Boathouse.

1. THE CASSIQUE ROUTE: High-tide friendly! This route takes you underneath the bridge to Eagle Island and up through the Cassique Golf Course.

2. THE EAGLE ISLAND ROUTE: High-tide friendly! Paddle around a little dock, underneath the bridge to Eagle Island, and along the edge of Eagle Island all the way out to the river and back up Oyster Creek to the boathouse.

3. CAPTAIN SAM’S ROUTE: The most popular route! Paddle out Oyster Creek to the edge of Kiawah toward Seabrook. This trip gives you the greatest opportunity for dolphin sightings.

4. THE SEABROOK ROUTE: Head toward the Kiawah River and take a little creek off to the right side. It meanders along hole fifteen toward Seabrook Island. This is an out and back!

5. MINGO POINT ROUTE: Go out Oyster Creek and take a left on the Kiawah River. Paddle it as far as you’d like!