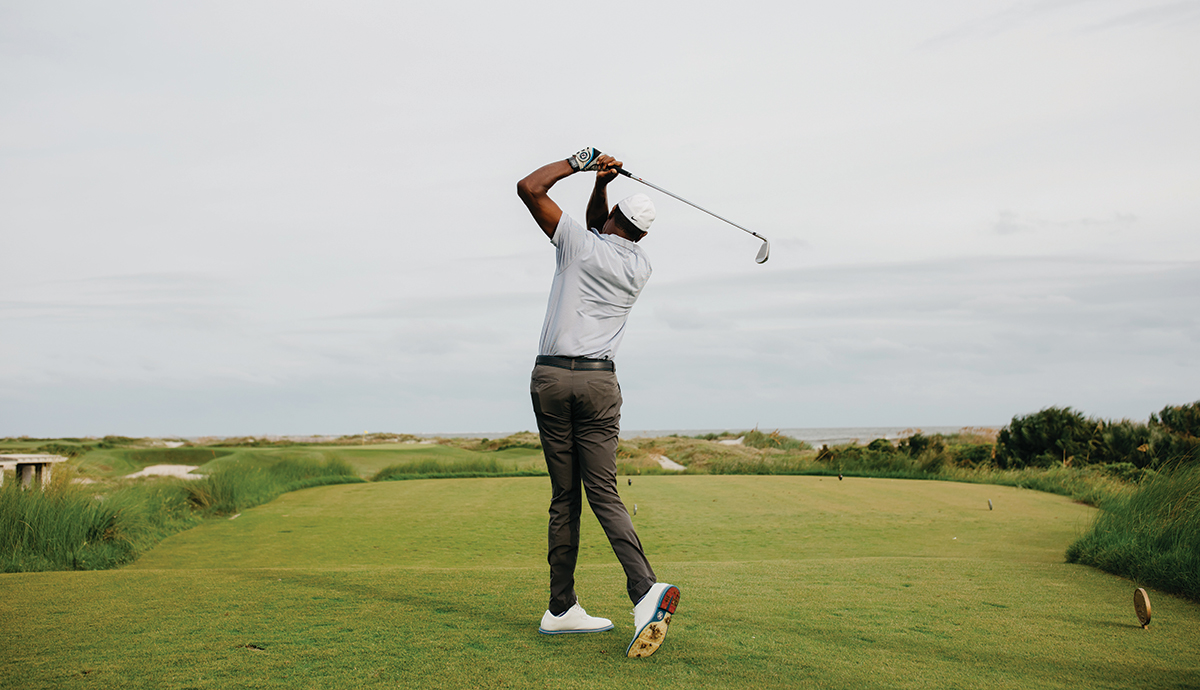 Jimmie James and The Top 100

Jimmie James was five years old when he set his first goal.

At that tender age, he did not know one person who had graduated from high school, and he promised himself he would. One of eight children, Jimmie grew up well below the poverty line in a sawmill town in southeastern Texas. “To call the house a shack is actually overstating. There was no plumbing or electricity,” he remembers. “Dust from the mill came in through the cracks between the boards.” In the winter, the kids mixed flour and water to paste on the crude walls to keep out the wind. Jimmie learned to read at an early age by the light of a kerosene lamp (another early goal). 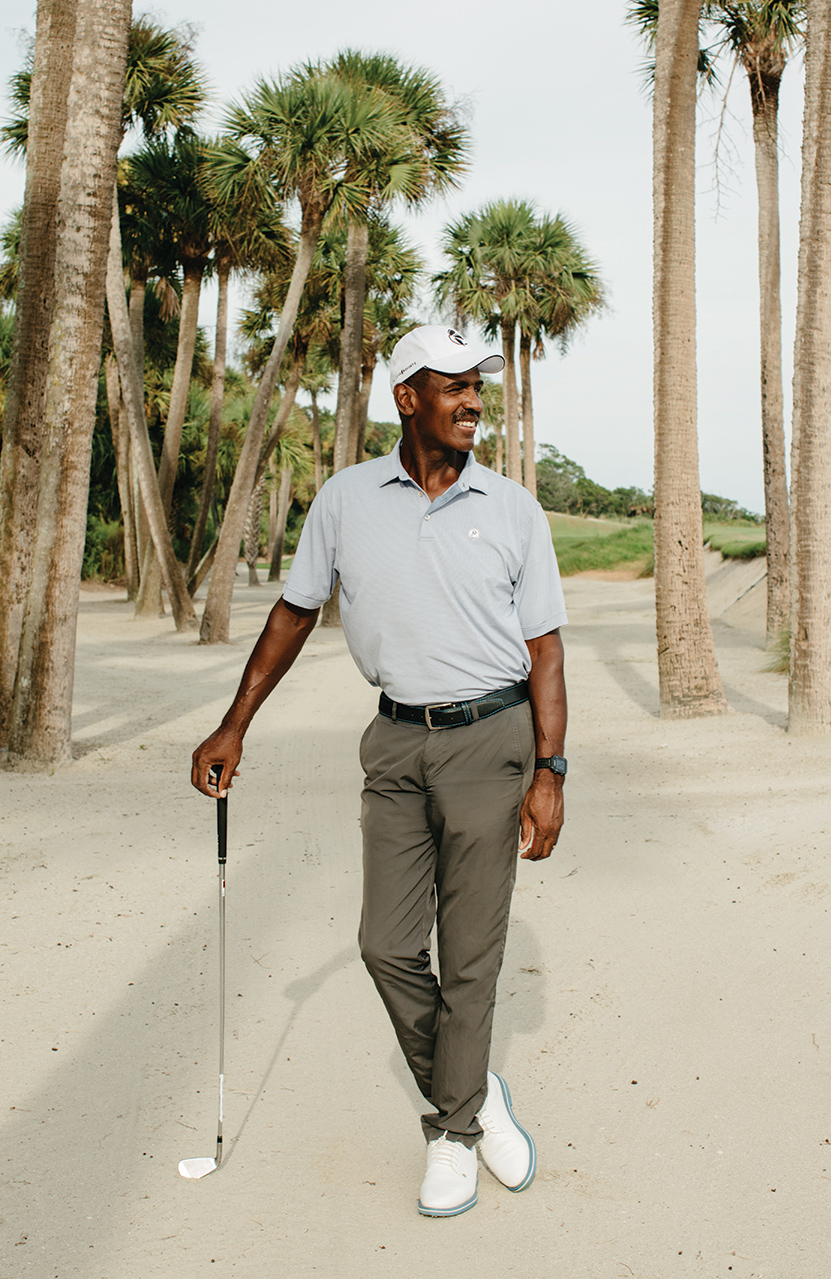 I met Jimmie on Kiawah in early summer. He and his wife, Erika, have a second home on the Island and are in town to golf (Jimmie) and go to the spa (Erika).It’s not hyperbole to say that Jimmie has an actual twinkle in his eye. He is engaging, magnetic, quick to smile. He is what I would describe as exceptionally self-actualized. You get the sense that he doesn’t believe in obstacles, or doesn’t believe in them the way you and I do. He loves a challenge, loves to set the bar laughably high and shatter reasonable expectations.

At fifty-eight, Jimmie retired from a wildly successful career with ExxonMobil. One month later he set out on an impossible mission—to play GOLF Magazine’s top one hundred golf courses in America in one year.

He didn’t just set out to play the top one hundred courses— he gave himself the outrageously ambitious time limit of a single year. That equals a round of golf every three days or so. That is a lot of golf. What’s more, these aren’t just ordinary courses. Eighty-seven out of one hundred are private. Some are so private that an unnamed pro joked, “The members here don’t even play with each other.” Playing Augusta National, for example? Virtually impossible. Shinnecock? Merion? These are some of the most exclusive courses in the world. If you know, you know.

It is important to note that of the top one hundred courses of 2017, there were twelve resort courses and one public course. To play those, Jimmie simply needed to show up and shell out some dough. The rest, however, were private. That’s eighty-seven private courses to finagle an invitation to. At the outset, Jimmie thought he had twelve private courses pretty well buttoned up. Twelve private courses plus the thirteen public courses meant he had twenty-five courses confirmed. That sounds like a lot, Jimmie explains, until you realize that there are another seventy-five to coordinate.

And let’s be clear, Jimmie isn’t a member at any of these private courses. In order to play a round, a member had to invite him, and more often than not, actually play with him. The logistics of this thing were nothing short of impossible. But that’s not even the full picture. These courses are spread out across the country. We’re talking weather restrictions, travel hiccups, closures for tournaments and renovations. Think of the travel days and long drives, the rental cars, the hotel rooms. And it’s not like he could knock out the golf courses in a region in a single go; he had to plan around member schedules. The logistics alone were a full-time job.

But perhaps the most daunting aspect of this preposterous undertaking was finding members to host him at each golf club. Jimmie had an impressive network to start. But to drum up seventy-five invitations from willing strangers? “Some of the clubs have just one hundred members or less,” Jimmie tells me. “In a country of 338 million people, you’re trying to find a needle in a haystack.” But his plan was simple: meet the next member, make the next connection, get on the next course, and then the next course after that.

The uncertainty, the frailty of the whole endeavor would have driven anyone else to throw in the towel. But not Jimmie.

This is where magic happened. Jimmie kept meeting the right people. People would know people and make a call on Jimmie’s behalf, and just like that he’d have another course ticked off the list. He has countless stories of chance encounters, serendipitous circumstances, fluke connections.

He met the head pro at Quaker Ridge, for example, in a dustup over a cracked windshield. He played the course the following weekend.

Jimmie believes in the power of what he calls the fourth question, the art of being able to hold a conversation long enough to find a link. “Once you get past your name, where you’re from, and what do you do—what comes next?” he asks. “So often we have people, places, and experiences in common. How do you find those links?” Again and again, Jimmie accomplished the impossible.

There were plenty of mishaps, however. He flew to Los Angeles to play The Valley Club of Montecito three separate times. The first two attempts coincided with record rainfall and mudslides in Santa Barbara. Hurricane Harvey waylaid his plans to golf with a friend at Castle Pines in Colorado. One course was almost destroyed during the California wildfires. Members cancelled, got sick, changed plans. He had twentynine courses left to play with just thirty-five days remaining. These final courses were spread across six states, from Idaho to New Jersey to South Carolina. There was no room for error.

At around five o’clock on June 11, 2018, Jimmie finished his one hundredth round of golf at Wade Hampton Golf Club in Cashiers, North Carolina. None of it, he tells me, would have been possible without his wife, Erika. “People ask me what the critical factors are to have played the top one hundred courses in a year. I always say that first, I married the right woman. It all started there.” At sixty-one, Jimmie is relatively new to the game of golf.

The uncertainty, the frailty of the whole endeavor would have driven anyone else to throw in the towel. But not Jimmie.

He started playing fifteen years ago when Exxon moved him to Beaumont, Texas. “The vice president of my division said, Jimmie, you’re going back to Texas, and you need to start shooting something.” He laughs, remembering. “He said, You can shoot animals, or you can shoot par!” Erika went out and bought him a set of golf clubs. It was also Erika who got him on Augusta National and Erika who bought him a book about a guy who played the top one hundred courses in the world (though it took him a protracted twenty years to do it). “She’s my partner in crime,” Jimmie says with a smile.

When Jimmie retired in May of 2017, he knew he wanted to travel the US. “I really wanted to reconnect with America,” he remembers. “To prove to myself that it was still the country that I remember, the country that gave me the opportunity to rise from poverty and live the American dream.” He started scheming. Golf had become a real passion, and initially he thought he’d travel to all fifty states and play a few courses along the way. Obviously, the final iteration of that scheme was much, much more complicated. 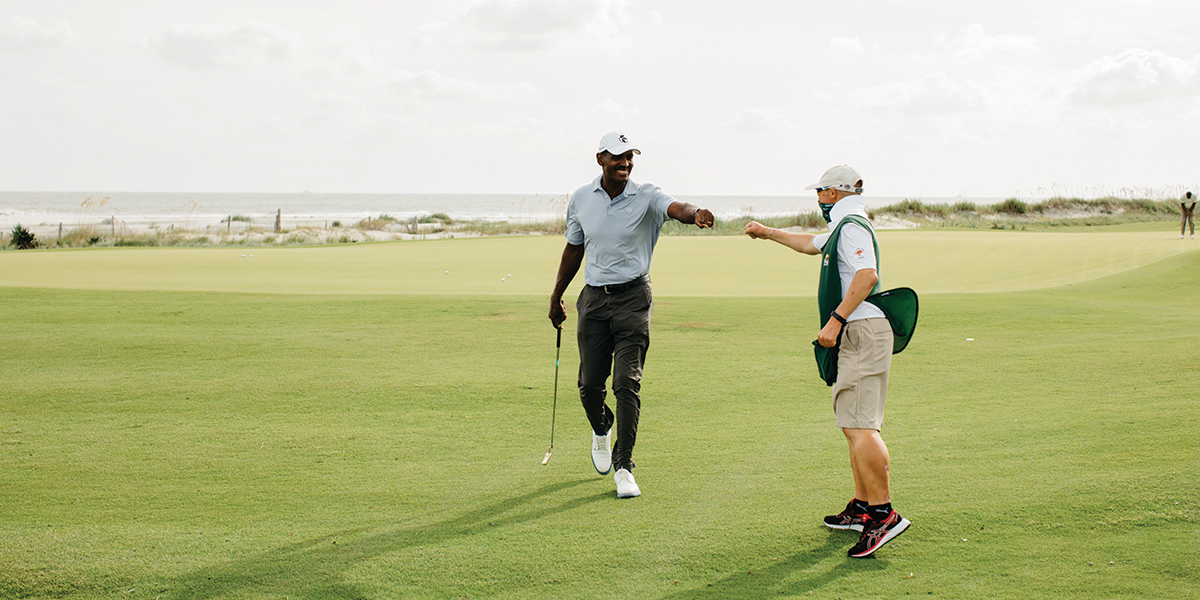 Jimmie and Erika started coming to Kiawah with their two kids in 2006. He sheepishly admits that he didn’t think he’d like it. “But as soon as we drove through the gates, something magical happened,” he remembers. “It was like every care and worry just floated away. We were sold.” They bought a home in 2011 and make the easy drive from Atlanta on weekends and holidays. “It really is a special place. We’ve traveled all over the world, but there is something different here,” he says. “The people, the environment, the beach, the lifestyle—the combination has a magic to it.”

And, of course, there’s the golf. The Ocean Course has always captivated Jimmie and, in part, inspired his quixotic mission. “I have always been amazed that you can actually play on the exact same courses that the professional golfers play on,” he says. “And what Pete Dye did with the land— especially those last five holes directly along the ocean—it’s really challenging.”

Golf is the perfect existential mechanism, the perfect impossible challenge for a rare bird like Jimmie James. Thinking about his childhood, his spectacular rise from poverty, his incredible career and subsequent life experience, it’s no surprise the guy loves a challenge. “You strike the ball just once, purely,” he says, beaming. “And you spend the rest of your life in pursuit of that.” — H.W.