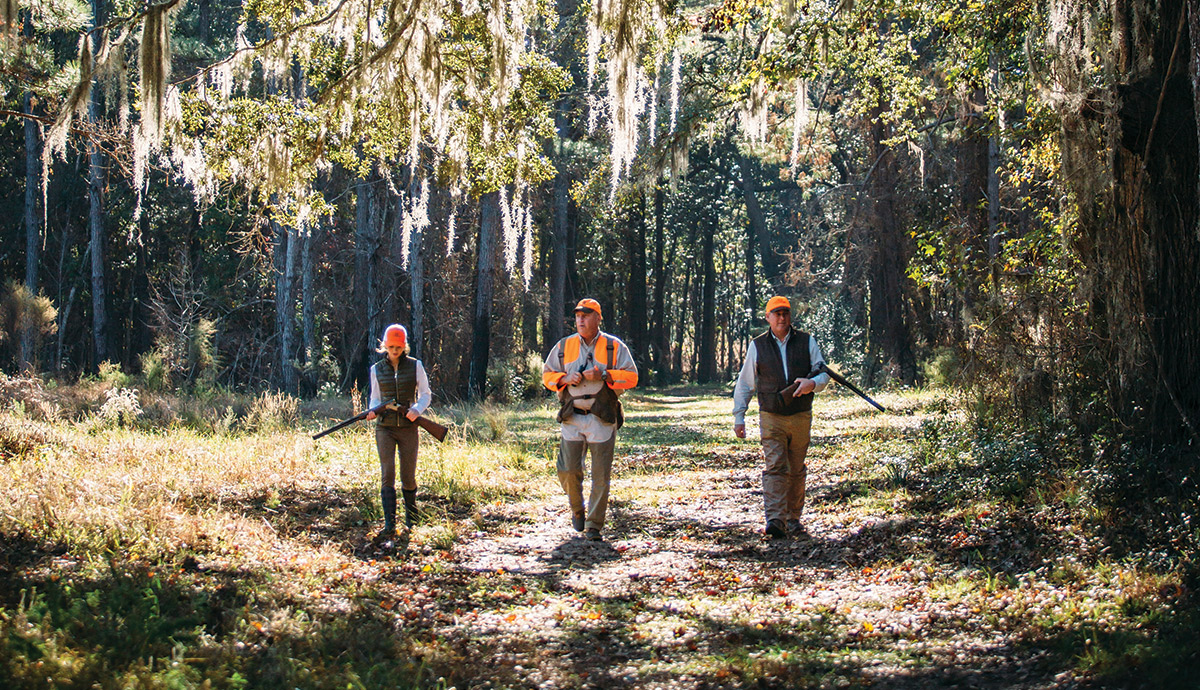 I arrive at the Kiawah Island Sporting Club on a cloudless Saturday morning in late fall.

Turning off of Bohicket Road, I wind through a beautiful mixed forest. The spectacularly colored autumnal leaves of the American sweetgum—red, yellow, and even purple—pop and swirl against the more subdued greens of loblolly pine and live oak. Designed by Marty Fischer, “the most famous left-handed wing shooter in the world,” and one of the most sought-after gun club designers in America, the four-year-old, 960-acre sporting club offers a variety of shooting—clay pigeon, skeet, trap, and five stand—across fifteen stations, as well as archery.

Robert Gibbs and his two German shorthaired pointers, Ridge and Smoke, greet me as I step from my car. Gibbs looks like the quintessential hunting guide—dressed in khaki- colored pants and an upland hunting vest with shooting patches and blaze orange paneling and a large game pocket at the back. We talk amiably while waiting for the others. Though he has hunted all his life, Gibbs didn’t start guiding until he retired from a career as a mechanic. Initially he borrowed an older guide’s dog and recalls, “When I saw that dog rock up on a point, I said to myself, This is what I’m supposed to be doing.”

Since that day, guiding upland hunts and training bird dogs—both German and English pointers—has been his life. Selectively bred from dogs that had abundant pointing and backing instinct, Gibbs works with a new dog, often twice daily, every day, starting at six weeks of age, on his farm in Dorchester County. The training begins with yard work, just walking around the farm, and eventually evolves into working with pawns and planted pigeons, reinforcing the canine predator instinct. Typically at around nine months to a year, the dogs are ready to go afield.

The partnership between upland hunters and their canine hunting companions is the stuff of legend. “They get into their prime around four to five years, but I’ll hunt them sometimes until they’re eleven or twelve—out of respect for the dog—because that’s what they’re born to do,” Gibbs tells me. Bird dogs, also called gundogs or pointing dogs, are typically divided into three classes: retrievers, flushing dogs, and pointers. The name pointer comes from the dog’s instinct to pause, aiming its muzzle toward game perfectly camouflaged in the underbrush.

Gibbs’s dogs are trained to detect game, point, and then flush the bird upon command. Once the birds are forced to flee, the hunter attempts to shoot down the bird, known as wing shooting. Once downed, the dog is tasked with retrieving and bringing the game to the guide. 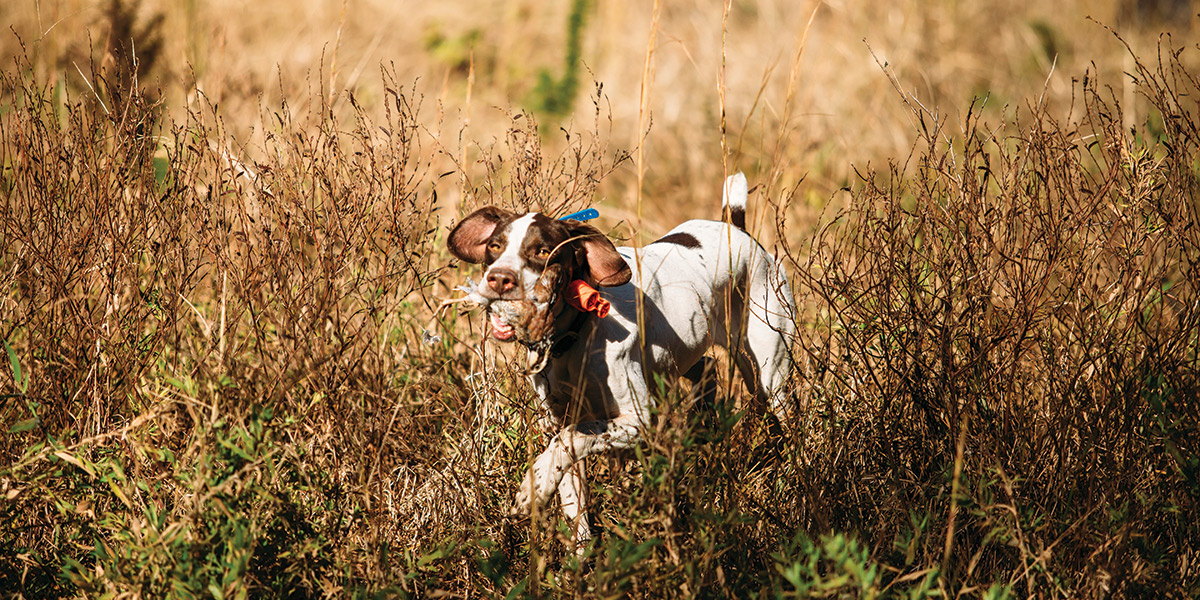 A truck pulls up with our hunters, Randall Glover and his thirteen-year-old daughter, Reese. Born in Charleston, Randall started hunting at the age of five and has hunted pretty much everything locally available—deer, turkey, ducks, and doves, as well as today’s quarry, quail. Climbing into golf carts, we drive under live oaks draped with Spanish moss, past trapshooting stations, and into the large open fields beyond. Leaving the carts, we continue on foot.

Bobwhite Quail – a reddish brown ground-dwelling bird with a short tail – are native to North America and named for their whistling bob-WHITE! call.

“The best part of hunting is sharing it with someone you like—like your daughter or a good friend,” Randall tells me, smiling at his daughter walking alongside Gibbs. “That and watching the dogs work. That’s what quail hunting is really all about.” When I ask Randall about hunting with his daughter, he smiles and says, “I have pictures of her at a really young age sitting in the deer stand with me. She’s just always wanted to go.”

We make our way around a big oak, through broom sage and bunchgrass, high-stepping over blackberry vines and dewberry. Gibbs is in the middle, whistling after his two dogs; both hunters are fanned out to either side. Almost immediately Ridge comes up on point, stubby tail erect, head tilted slightly downward, frozen in place. Gibbs motions the hunters forward before kicking at the underbrush. A flurry of commotion—beating wings and blowing grass—followed by the quick one-two reports of Randall and then Reese’s shotguns and the bird goes down forty yards away. Ridge charges through the underbrush, grabbing the inert bird in his jaws, obediently retrieving it to his master.

Randall playfully chides Reese about being ahead in the bird count as we continue our way down field, both dogs running through the undergrowth, searching for their next chase. These fields we are walking through are now maintained as quail habitat, something that is increasingly hard to find Gibbs tells me. Bobwhite quail—a reddish-brown ground-dwelling bird with a short tail—are native to North America and named for their whistling bob-WHITE! call. More often heard than seen, these elusive birds keep within dense low cover, crouching and freezing in place when threatened, relying on camouflage to stay undetected.

According to Gibbs, that habitat went away with modern farming and forestry practices—clear-cutting and burning slash removes all protective ground cover that quail depend upon, while modern intensive farming leaves no edge for wildlife, and chemicals such as Roundup™ remove beneficial grass species. Bobwhite quail require broom sage and bunchgrass to breed and lay their eggs in. “Farmers used to have a small field, and it was a two-row operation. Now they have like sixteen rows, and they took all the habitat out,” Gibbs says as we walk the fields. By some estimates bobwhites have declined in population by 85 percent since the 1960s. For that reason, essentially all quail hunts in the Eastern United States utilize farmed birds.

Two hundred and fifty acres of the property was set aside in a wetlands conservation easement and controlled burns are done regularly to stimulate new growth of native species.

Matt Stanis, Kiawah Island landscape superintendent, tells me they have implemented a multi-year plan to improve overall habitat on the property. “We did some forestry operations to thin the timber. Once you let sunlight into the understory floor, you quickly get regenerative growth.” That new growth is important nourishment for many wildlife species, and turkey and deer populations, in particular, have responded positively.

“This is best management practice,” Stanis tells me. “We now have partridge pea naturally regenerating as well as a lot of native grasses—staple food sources for quail.” Stanis has gone a step further, planting millet, corn, sunflower, and sorghum as supplementary food for wildlife. Additionally two hundred and fifty acres of the property was set aside in a wetlands conservation easement, and controlled burns are done regularly to stimulate new growth of native species. “It’s been rewarding to see how quickly the land has responded. We set out to improve the land, and the quail hunting concept came into being on its own.”

I catch up with Reese after a few more rounds of point, flush, and shoot. Randall is still ahead in the count, but after a slow start his daughter is gaining on him. This is Reese’s first quail hunt, though by now she’s a veteran deer, turkey, and duck hunter, having started at the tender age of five, like her father (this past deer season, she started hunting in the stand by herself). When I ask her about first impressions of quail hunting, she replies, “I like it, it’s really fun…” before breaking off mid-sentence—all business—telling me the dog is once again on point.

At the Kiawah Island Sporting Club quail hunting is available to any member. Two hunters get thirty birds, which are cleaned, vacuum-sealed, and returned post-hunt. “I think the hunting is really taking off,” Randall tells me as we head back to the carts. “Gibbs did five hunts the week of Thanksgiving. I think people are really taking to it.”

When I speak to Stanis, he’s enthusiastic about the prospect for the Sporting Club. “During the pandemic, people are getting back into outdoor activities and this is filling a niche,” he tells me. “We’ve seen a lot of kids showing interest, and it’s providing one more way to utilize the outdoors. The timing couldn’t have been more perfect.” — J.C.

An Upland Hunt
STORY and PHOTOGRAPHY by JOEL CALDWELL