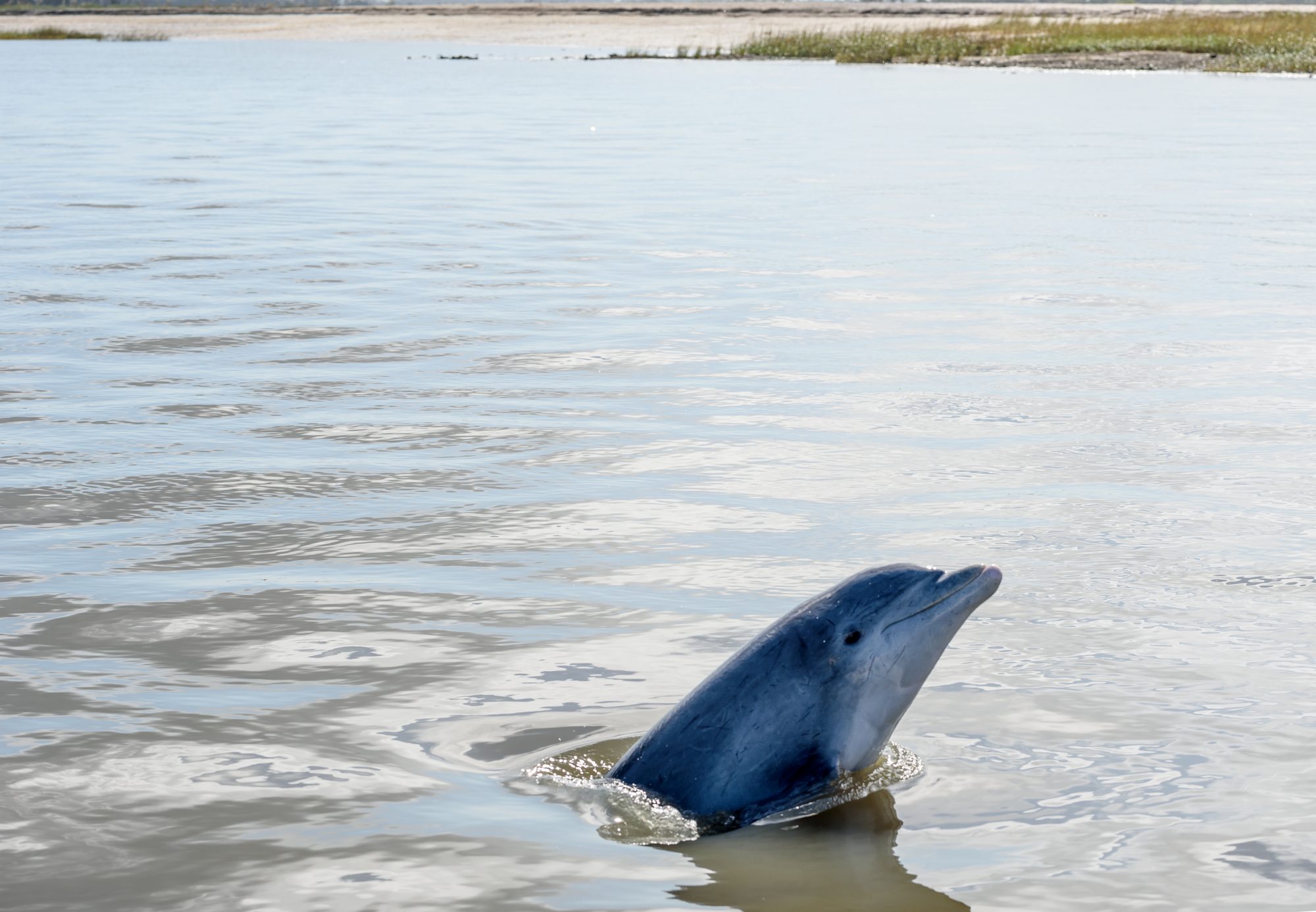 When spending time on Kiawah Island, you are sure to spot at least one or two Bottlenose Dolphins playfully navigating the Island’s intricate waterways.

Atlantic Bottlenose Dolphins are the chief species of marine mammal inhabiting the Island. They are undoubtedly one of the most popular attractions in the area. Residents and visitors watch in awe as the local dolphin population participates in a unique — and somewhat rare — feeding practice. One that only Kiawah Island dolphins have been reported to participate in. In fact, Kiawah’s waterways have been documented as one of the few places on earth where wild dolphins perform this intriguing behavior.

For those in search of their next Kiawah adventure, below is everything you need to know about Kiawah Island dolphins, strand feeding, and some of the Island’s other local wildlife.

An Introduction to the Bottlenose Dolphin

One of the most common species of dolphin, the Bottlenose Dolphin can live in most parts of the ocean, with the exception of Antarctica and the arctic. In the United States, these dolphins travel up and down the East Coast, from Maine to Florida as the seasons fluctuate.

Bottlenose Dolphins often live in social groups, or pods, that consist of multiple generations. This may include grandparents, parents, children, and their siblings. Offshore dolphins tend to live among hundreds of individuals. Whereas inshore, or estuarine dolphins, such as the pod residing near Kiawah, tend to live in smaller groups. Members of pods frequently spend their days playing, hunting, and exploring together.

A dolphin’s main food sources consist of local species of fish, squid, octopus, jellyfish, and a variety of crustaceans. Kiawah Island dolphins are partial to sea trout, red drum, and striped mullets that can be found in the tidal waterways where the Kiawah and Stono rivers run into the Atlantic.

Getting to Know the Kiawah Island Dolphins

Kiawah Island is home to a pod of roughly 25 Bottlenose Dolphins. These local marine mammals have lived around Kiawah and Seabrook Island for several decades. This particular school of dolphins is famous for regularly partaking in strand feeding — an uncommon feeding practice rarely seen in any other species.

During the entirety of their inhabitance here, this pod has been studied and tracked by local scientists who have been fascinated by this behavior. Three dolphins in particular, Kai, Koko, and Step, are known to make frequent appearances during low tides.

The Island as a whole welcomes hundreds of dolphins (of varying species) that pass through our waters. The same can be said for the population of wild sea turtles that frequent Kiawah’s shores.

Meet the Loggerhead Sea Turtles of Kiawah Island that migrate to our shores each year for nesting season. Learn more about their behaviors and the community’s efforts to protect them.

Strand feeding typically occurs in Captain Sam’s Spit, the inlet where the Kiawah River spills out to the Atlantic — this area can be found near the Cassique Boathouse where Kiawah Island Club Members spend much of their time out on the water.

Those who have witnessed strand feeding can attest to how incredible this ritual is to see in person. During low tide, the dolphins will herd a school fish, gradually pushing them closer and closer to the shore of the Kiawah River. As they chase the fish up the bank, they create a wave that then throws them out of the water. The dolphins then push themselves up onto the sand and eat as many fish as they can before sliding back into the water.

Keep in mind that not all Kiawah Island dolphins know how to strand, however. It seems that this behavior is passed from mother to calf. For reasons unknown to scientists, adult dolphins are not able to learn the feeding technique once they reach a certain age. Because of this, a little less than half of the Island’s dolphin population can perform strand feeding.

To keep local wildlife safe, there are some guidelines the community asks of anyone who wishes to see the ritual:

Bottlenose Dolphins are not the only wildlife that calls Kiawah Island home. Across each of the Island’s landscapes you will find an abundance of wildlife, both common and rare. American alligators frequent many of the Island’s lagoons, as do several species of frogs and even slimy salamanders! In the sea, Loggerheads, Bonnethead sharks, and an array of tropical fish can be spotted below the water’s surface. On land and in the rivers, you will find bobcats, otters, deer, foxes, and coyotes, often seen thriving.

Part of living on Kiawah means fostering a deep appreciation for the local wildlife that brings a uniqueness to the Island. As you explore the beauty around you, keep an eye out for the flurry of wild animals you may run into. Download our Kiawah Island Wildlife Lookbook to take note of which animals you spot on your daily outings. Click the button below to download your complimentary copy of the guide and get started.

This post was originally published in 2011 and refreshed in 2021.