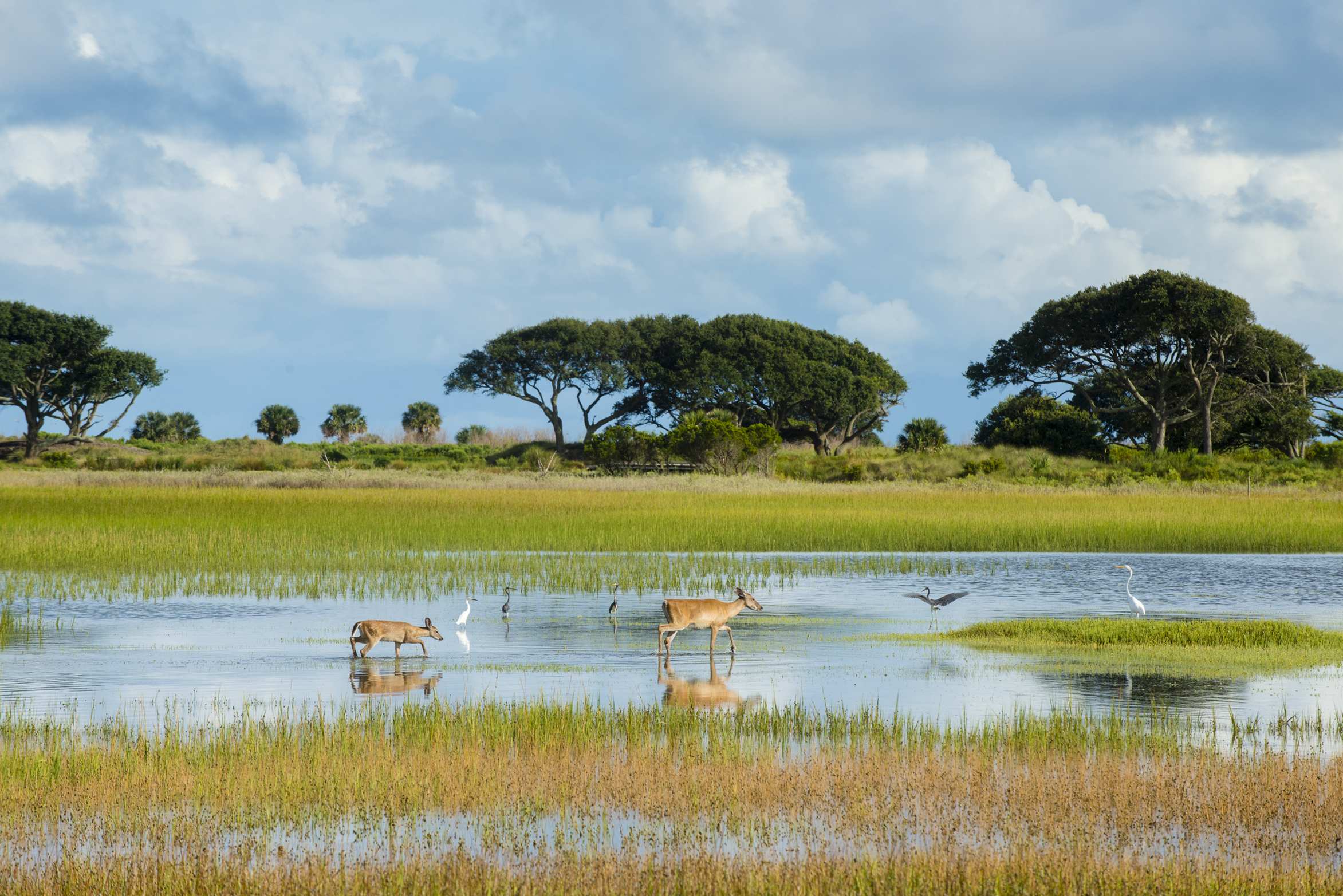 Kiawah Island boasts a unique balance of tasteful development and natural landscapes. There are plenty of ways to take a walk on the wild side on the island (by bike, on foot, or via kayak, to name a few)— and you’re likely to encounter some of Kiawah’s native animals during your stroll. Learn more about the birds, reptiles, and mammals that inhabit the island below based on their preferred terrain.

The island’s sandy stretch of beach along the Atlantic Ocean is as much a draw for native species as it is for Kiawah residents. Beach terrain and seawater offer a comfortable home for species like horseshoe crab, ghost crab, bottlenose dolphins, and loggerhead sea turtles.

Dogs aren’t allowed on the beach for an important, conservation-focused reason: birds. Native birds like black-bellied plovers, sanderlings, sandpipers, gulls, brown pelicans, and oystercatchers flourish in the east and west ends of the beach in particular.

Rivers are a lifeline for animals living along the banks. On Kiawah, conservation areas like Beck Island benefit from the life-giving water of the Kiawah River. Beck Island offers prime habitat for birds, but it’s largely a refuge for mammalian wildlife like bobcats, deer, raccoons, and otters.

Kiawah Island is home to a maritime forest — shoreline estuaries with trees in reach of salt spray. The maritime forest is home to many of the same animals you’d find in river areas like Beck Island as well as some of the animals who call the marshlands home. This includes deer, raccoons, and painted buntings.

Now that you know more about Kiawah’s many animals, you may be interested in one of our guided naturalist walks. We offer a variety of guided tours, including a nighttime beach walk, ocean beachcombing and seining, a sunset cycle, a wetlands bike ride, and beginning birding classes all designed to nurture a love of nature. Browse them all here.

When you become a Kiawah Island homeowner, you receive unparalleled access to the island’s pristine, natural habitats. However, if you’re an adamant nature lover, some properties offer more access to flora and fauna than others. Be the first to live at 456 Caroline Shores Lane, a forthcoming property in the Ocean Park neighborhood nestled in Kiawah’s marshlands and designed by award-winning architect Christopher Rose. Or, enjoy peaceful woodland views at 509 Claret Way in the Cassique neighborhood. Its open-concept floor plan means you’ll have a clear view of nature from any spot in the house.