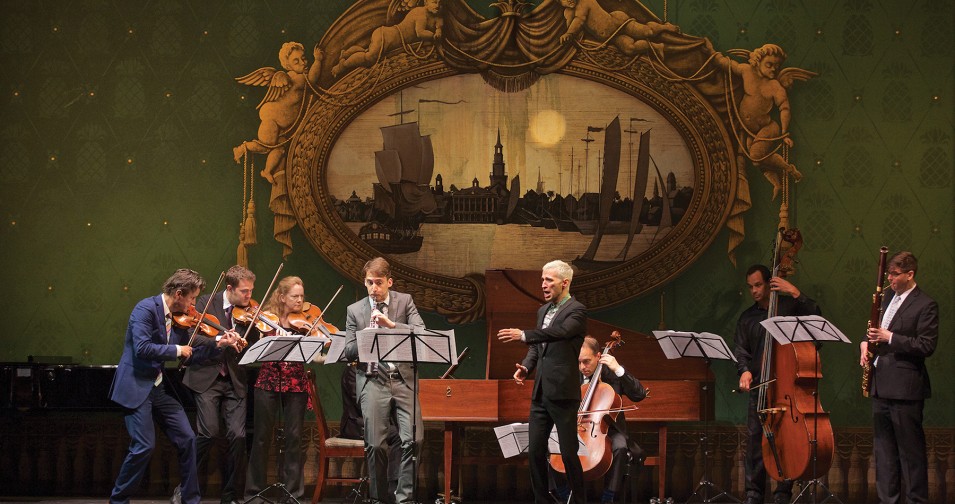 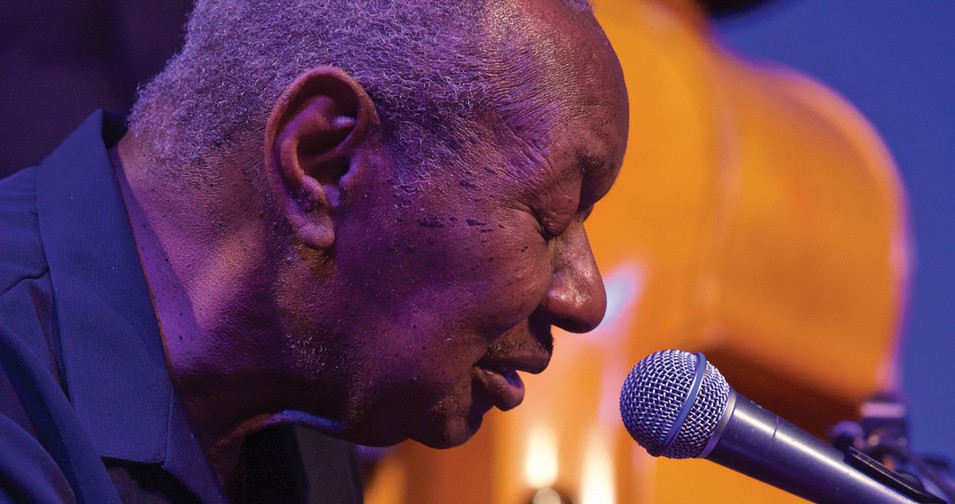 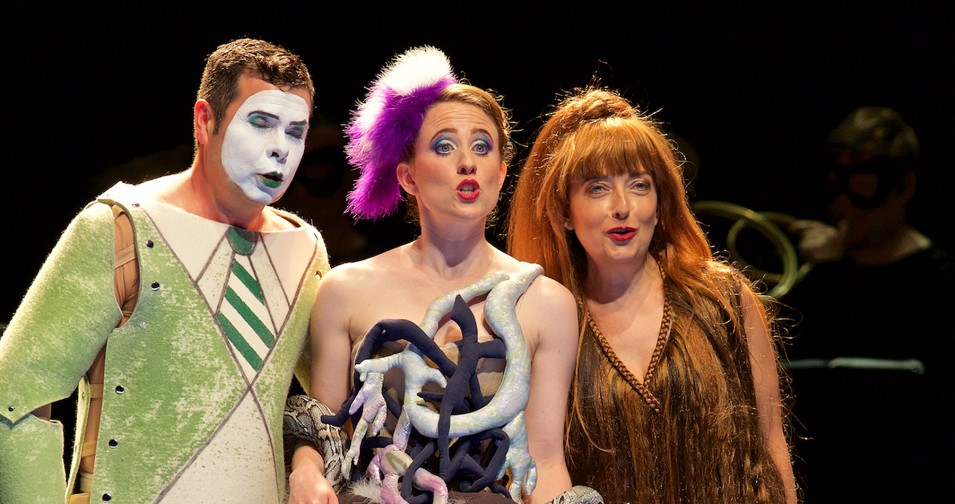 “Spoleto Festival USA celebrates the big 4-0, and with a midlife crescendo no less.”

There is a moment, the split second when the first chords of music fill the air and the audience gets a glimpse at what is to come. That magical moment this past May—as the curtain rose on the Gaillard Center stage to reveal an astonishingly gorgeous wrought-iron gate behind which a Charleston streetscape came to life—elicited one tremendous and thrilling collective gasp of delight. This was how Spoleto Festival USA unwrapped its gift of Porgy and Bess—with imaginative wow and exuberant beauty. And in doing so, it set the tone for the next seventeen days during which the Spoleto Festival USA celebrated its fortieth season.

Charleston’s venerable springtime arts bash embraced turning forty with gusto. Far from any hints of midlife crisis, it commanded the stage (all fourteen of them) with soaring poise.

It dazzled with vitality and danced with bravado, affirming to opera lovers and hip-hop fans alike that creative inspiration and expression may well be the fountain of youth. Case in point: artist Jonathan Green, ever elegant and (despite five-plus decades as a working artist) apparently ageless, who was ubiquitous during the 2016 festival.

Green’s Gullah-inspired painting Harvest Gathering was featured on the Festival poster and graced the covers of some 25,000 program guides; his innovative design direction and jubilant costumes were the centerpiece of the  much-raved about Porgy and Bessproduction; his handiwork was woven throughout Charleston neighborhoods via site-specific African-inspired installations on “Porgy Houses;” and the artist himself, looking young and dapper, was on hand at all six Porgy and Bess performances to greet guests and offer a soft-spoken word of gentlemanly welcome.

This is how Spoleto at forty does grand opera and brings Porgy home—with a personal, local touch and by creating an expansive sense of “home,” thanks in part to Gershwin’s iconic music and to Green’s imaginative approach. Indeed, as an unofficial ambassador of the Lowcountry’s cultural riches, Green represents all that the Festival has embodied since its inception in 1977: a sense of place, a commitment to exploration and discovery, and an unbridled appreciation for the power of art to bring people and cultures together.

There was, however, one definito absence during this fortieth season. The 2016 opening ceremony was the first time in four decades that Joseph P. Riley Jr., who recently stepped down as mayor of Charleston, did not preside over the festivities and offer greetings in enthusiastic, if imperfect, Italian.

Indeed, Joe Riley was pivotal back in the mid 1970s, when Gian Carlo Menotti first proposed to bring Spoleto Festival to an unpolished and economically challenged Charleston. Menotti first founded the Festival of Two Worlds in 1958 in Spoleto, Italy, and then selected our historic seaside town as a counterpart location in the United States. The proposition was met with skepticism. Launching an international arts festival seemed audacious, and would undoubtedly be risky and costly (an $800,000 budget plus a $70,000 overrun for the twelve-day, one hundred-event run that inaugural year), but the young Riley along with College of Charleston then-president Ted Stern remained its dogged champions.

They understood the transformative power of the arts. They knew that Festival-goers would have “their hearts moved, their souls touched, their horizons lifted, their aspirations enhanced, their creative impulses charged, their anguish soothed,” as Riley would say (in English) in each year’s opening remarks, by the dynamic collage of music, dance, theater, poetry, and “the unrelenting quest for excellence” that Spoleto offers. And that in turn, the fabric of the city itself would also be changed.

This vision has been borne out in numerous ways over the years—with the Spoleto-spurred opening of new hotels and restaurants, with the growth of local arts organizations (pre-Spoleto, the Charleston Symphony Orchestra played six concerts a year with an annual budget of $50,000; by 1986 that expanded to nineteen concerts and a $625,000 budget), and with the restoration of the Dock Street Theatre, Memminger Auditorium, the Spoleto headquarters on George Street, and in various site-specific installations around town. And Spoleto’s success helped birth the City’s complementary Piccolo Spoleto Festival. But perhaps the most obvious recent example of the Festival’s impact was Spoleto’s return last May, after a three-year hiatus, to a brand-new Gaillard Center, proudly sporting a $142 million face-lift. Quite a swanky fortieth birthday present.

With fine-tuned acoustics, jewel box hues, plush mohair seats, and classic architectural detail, the overhauled Gaillard Center set the tone for a memorable anniversary year, beginning with an opening night performance of Porgy and Bess, “the only choice,” says Spoleto Festival USA general director Nigel Redden, to appropriately mark the return to the Gaillard. The opening weekend also included a 40th-Season Celebration Concert conducted by Steven Sloane. The program showcased Spoleto all-stars, such as soprano Jennifer Check, tenor Victor Ryan Robertson, jazz vocalist René Marie, and chamber music favorites Geoff Nuttall et al., and a world premiere of a John Kennedy composition (dedicated to Joe Riley). There was also a Menotti aria on tap, and the perennial Festival sound machine, the Westminster Choir, offered “a stunning moment,” according to The New York Times review of their rendition of Stephen Paulus’s “Hymn to the Eternal Flame,” with choir members “angelically deployed” on opposite sides of the Gaillard’s top balcony.

And that was just for starters. The next two weeks witnessed similarly bold and triumphant performances on grand stages like the Gaillard and more modest venues like the Simons Center Recital Hall, where jazz great Freddy Cole’s quartet needed zero embellishment. For the opening night concert in the Cistern Yard, Nashville’s raucous Old Crow Medicine Show made even the Spanish moss do a little jig. Then juxtapose Old Crow’s high-energy romping and stomping with the pared-down perfection of Manual Cinema’s shadow puppet poetry in ADA/AVA—or with the eloquent, muscular precision of the Bill T. Jones/Arnie Zane dancers or the Gate Theatre’s spot-on delivery of Oscar Wilde witticisms—and you get a small taste of the 2016 Festival’s rich smorgasbord.

Then there was the razzle-dazzle of Porgy and Bess, which The Telegraph of London called “a momentous and triumphant homecoming;” the consistently delightful Bank of America Chamber Music series, thanks to the finesse, humor, and unbridled talent of Nuttall and his St. Lawrence String Quartet; and the more daring, some might say dissonant, productions like Helmut Lachenmann’s U.S. premiere of The Little Match Girl, in which 106 musicians perform on scaffolding encircling Memminger Auditorium—a “prime example of what is so amazing about doing this festival in this city,” says Redden, who in the early ’70s worked alongside Menotti in Italy and has guided Spoleto Festival USA’s course since 1985. “We can do a wonderfully expressive opera like Match Girl by taking a raw black  box space like Memminger, which doesn’t exist in most cities, and turn it into a theater in the round.”

“Having all of the performance spaces, which we used at full capacity this year, and marking our fortieth season inspired a robust and celebratory program.” —Nigal Redden

“Having all of the performance spaces, which we used at full capacity this year, and marking our fortieth season inspired a robust and celebratory program,” adds Redden. And that robustness spilled out beyond the Festival’s official programs and venues into gardens and courtyards from South of Broad to Kiawah, where private Spoleto soirees and cocktail parties feted visiting performers and arts patrons and kept Charleston’s social scene buzzing till the wee hours.

The late-night Spoleto partygoers, the young children running through the magnificent Middleton Place gardens before the annual Wells Fargo Festival Finale concert begins, and the visitors from forty-nine states who bought opera and theater and dance and jazz tickets this past season—the conjoining of community and creativity: this is how an arts festival forty-years young becomes the creative lifeblood of a city, a region. This is our Spoleto. The pulsing brilliance on stage and off, whether it’s the belting baritone of Porgy serenading his woman Bess, or artist Jonathan Green signing a guest’s program, or someone tapping her foot in time to Jason Moran’s reimagining Fats Waller’s tunes as a modern dance party. It’s a reimagining of what’s possible, what’s meaningful, what’s magical, what’s beautiful, for all of us, no matter our age.