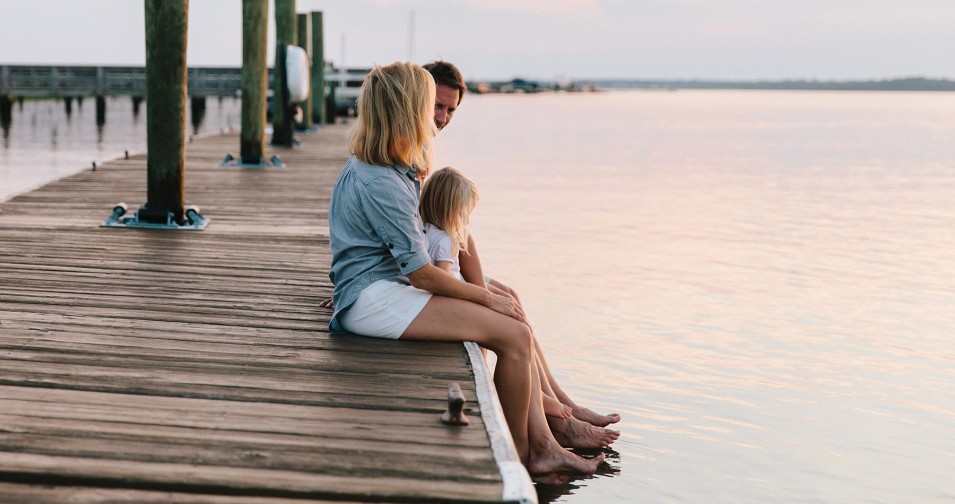 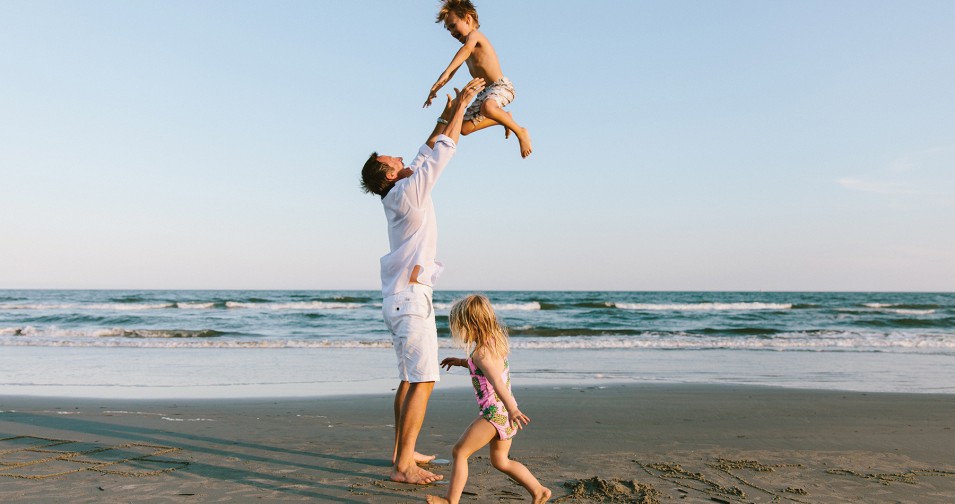 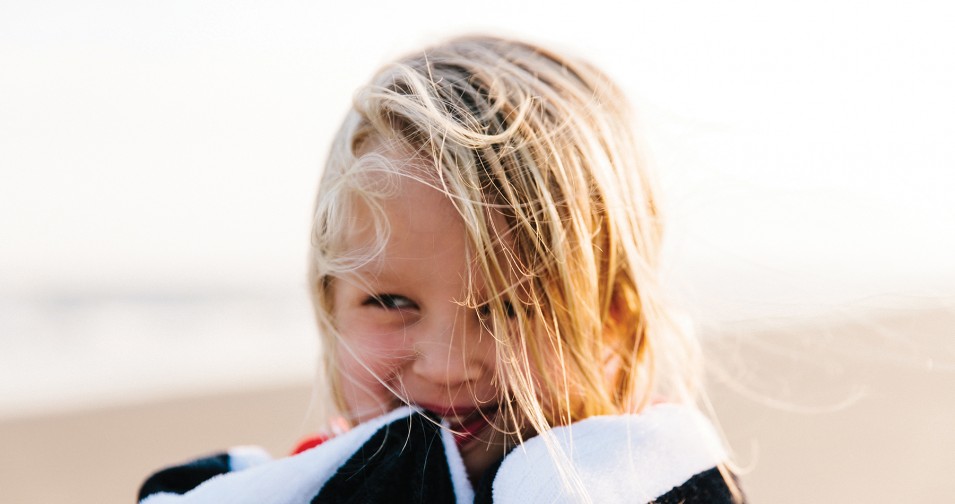 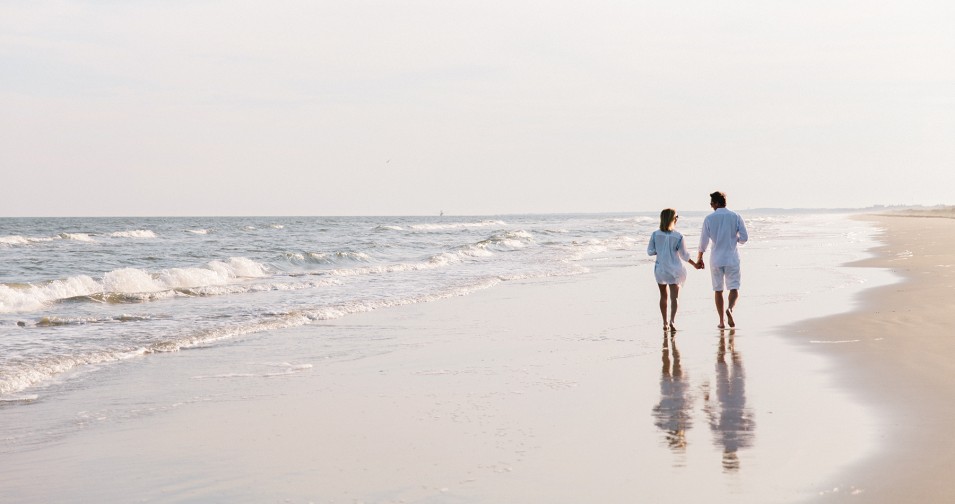 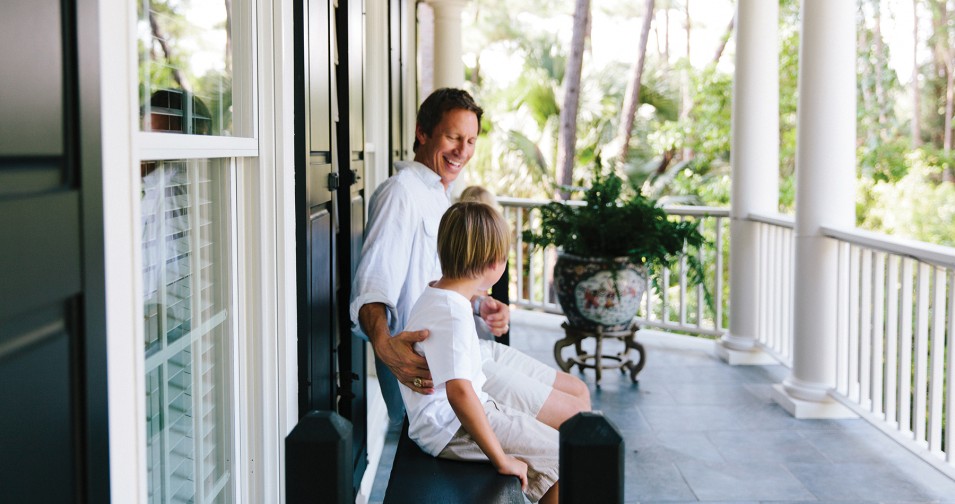 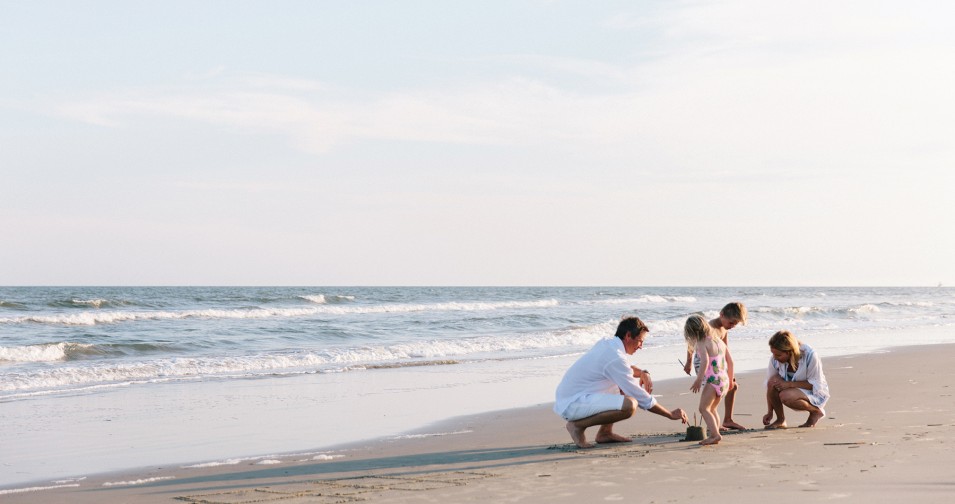 “I left Mark and the kids lounging in a tidal pool and went for a walk.”

We’d been at the beach a couple of days. You don’t realize how much you’re escaping until you’re gone. You think you’re going for the pluses: the beach and the golf and the pool with the flume waterslide, but the minuses, the things you leave behind, count almost as much. No inputting invoice numbers, no moving the car for street sweeping, no deciding what to wear to the silent auction.

Still, the older I get, the harder it is to get into vacation mode. Even while walking on the beach, the stresses of everyday life kept scrolling through my head.

Going by The Sanctuary, I passed a beachfront wedding, the bride barefoot in a white dress. She was holding a bouquet of gardenias and looking at her new husband as he said his vows. If a tidal wave had hit, I don’t think she would have noticed.

I was instantly taken back ten years to my wedding, our first dance, Mark and I gazing at each other like we were the only people in the world. I found myself feeling a sugary crush for him all over again.

I turned around and headed back, looking forward to the afternoon. We were going to take the kids on a bike ride to the nature center, get some pictures with the turtles and snakes.

As I got back, Tanner came running at me, dirty blond curls bouncing, legs churning as fast as they could. He was three and still had a little bit of baby fat, and when he ran he only pumped his left arm.

I picked him up and carried him over to Mark and Sally.

“Hey, Superdad,” I said, kissing my groom on the side of the mouth.

I was still feeling that cotton candy crush.

Sally had found a horseshoe crab that was flipped over on its back. Mark showed her how to turn it back over.

She was so proud. I had to take her picture.

I don’t know what it is with men always wanting to throw things. Yes, as he pointed out many times afterwards, it was a “perfect toss,” but I’m not a first baseman, and I was standing in a tidal pool.

In one salty splash, the whole afternoon went sideways. Mark went from being the groom that made me weak in the knees to the spouse I wanted to knee in the crotch. Tanner had a meltdown over yogurt. “This is strawberry banana! I wanted JUST STRAWBERRY!” Sally pouted because the nature center excursion was postponed. And my phone was in a bowl of rice, fighting for its life.

I do give Mark credit for trying to lighten the mood. “Taking young children to the beach is like being a servant at Downton Abbey,” he said. “It’s a different kind of vacation when you’re beholden to people who have to be dressed, fed, slathered in sunscreen, and have no idea what a weekend is.”

That night it stormed hard. I got out of bed. Mark was already up.

“I guess I’m used to checking the basement when it rains,” he said.

“Don’t have to worry about that here,” I replied.

We opened the French doors onto the porch and listened to the rain.

He held up a CD: Beach Music Classics.

“I found this in the bookcase.”

“Jan and Dean at two a.m.? Got anything mellower?”

“No, no.” He put the disc in the stereo. “This is Carolina beach music, shagging music.” He pushed play on an old song by The Drifters.

This magic moment So different and so new.

I was just trying to be a good sport. I closed my eyes, put my hands on his shoulders.

Sweeter than wine
Softer than the summer night

The rain was coming down steadily. No aromatherapist could ever simulate the heady mix of air we were swimming in—the pluff mud and the ocean, the fresh rain, the lingering whiff of sunscreen.

Somewhere in the middle of the song, somehow just another night of Pull-Ups and pj’s turned into our wedding night all over again. Better, really. The night we got married, our whole lives were ahead of us, and our only worry was making our flight the next morning. Now we still had so much ahead of us, but we also had so much to be proud of: a home, two beautiful children.

We’d tried so hard to make our wedding special—the right colors and parting favors, and so on—but the life we’d built together over the last eight years, the pigs-in-a-blanket and the homegrown tomatoes, the crayon art work, the bedtime songs and inside jokes, it was exponentially more unique and powerful. It was something entirely us.

After that our days on the Island were different.

My phone revived but I found myself using it less. More often I had a colored pencil in my hand, helping Sally with her journal. She wrote and drew pictures about the sandcastles she built daily, the king snake she got to hold at the Nature Center, the nest of owlets we discovered (4 Tiny Beakd Fuzzballs!!!).

Tanner and Mark named all the anole lizards on the porch.

“What about this guy on the screen?”

“He fixes the lizard motorcycles.”

The nights were quiet. The music of The Drifters, The Tams, and the Swingin’ Medallions mixed with the surf and the cicadas. The same sounds people had heard along the South Carolina coast for decades.

I dropped the kids at school and went for a walk before work.  Submit payroll / Schedule the Irvin walk-through / Pick up snacks for Tanner’s class… Before letting my list scroll through my head, I took a deep breath and reached into my storehouse of Kiawah memories:

Sally paddling her own kayak. Orange popsicle dribbles running down Tanner’s little brown belly. And slow-dancing with my husband, sand on our feet, the rain falling hard on the porch roof.