“The marsh is alive with the burbles and clicks of mussels, oysters, and fiddler crabs.” 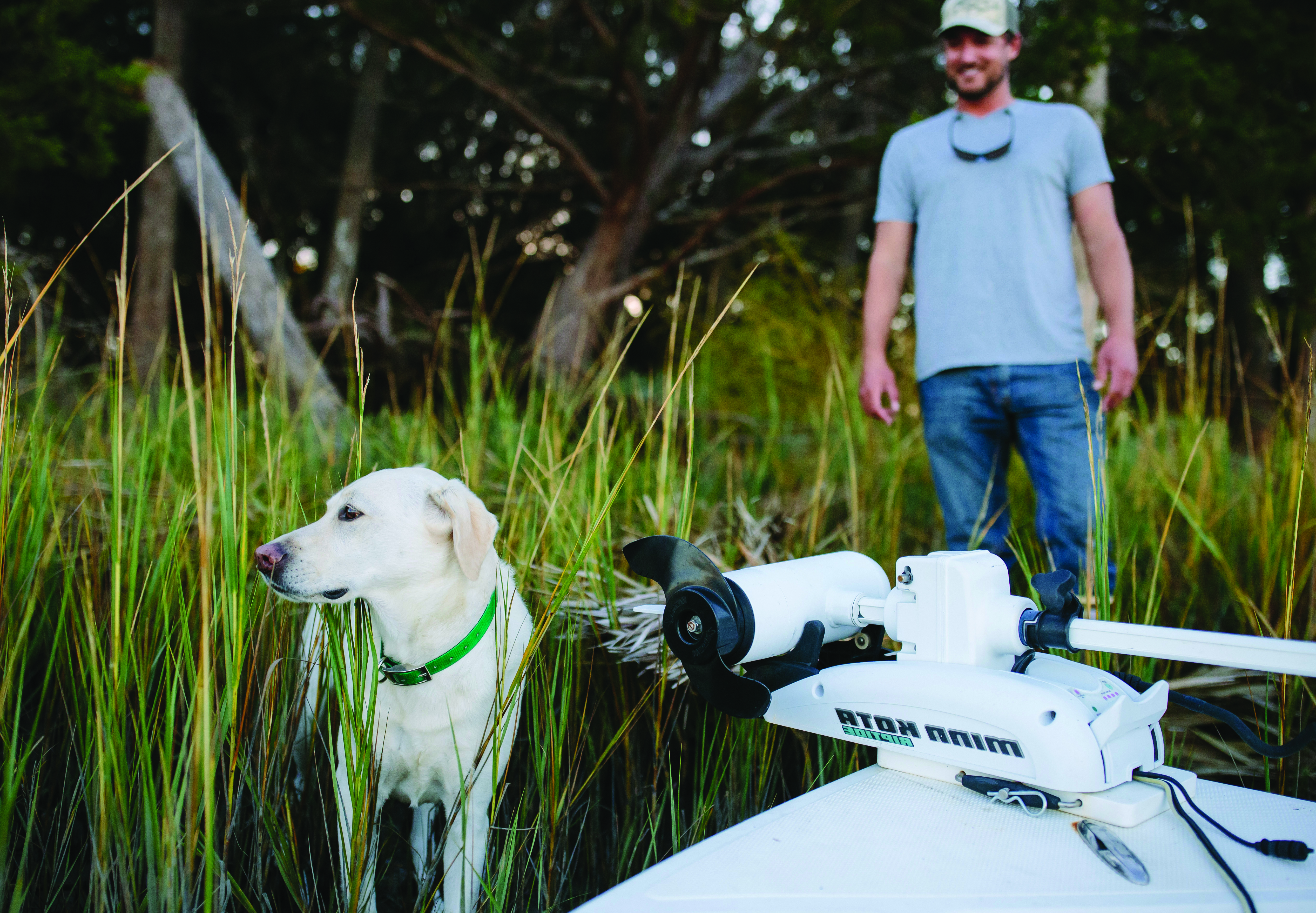 It is a warm afternoon in late October.

When I pull up to the dock at Rhett’s Bluff, Elliot Hillock and his girlfriend, Lauren, are waiting. Their dogs, Sasha and Tide, race in and out of the sweetgrass. We unload packs, sleeping bags, tents, and sundry groceries from the car and ferry them down the dock to Elliot’s bay boat. When everything is loaded, the boat is comically heaped with bags, firewood, a small gas stove, two ice chests, a large soup pot, four duffels, and a partially inflated air mattress—not to mention the two dogs and a quiver of fishing rods.

Elliot and I have been scheming about this trip for years. But it’s been tricky to plan. As the Kiawah Island Club’s boat captain, there is rarely a sunny afternoon when Elliot isn’t booked with fishing charters or cruises, which doesn’t leave much time to coordinate tides and weather for perfect camping conditions. It’s something I’ve wanted to do for a long time, sleep out under the stars in my favorite place, get to know the marsh and the creeks a bit better in the hush of the moonlight.

We set out east on the Kiawah River. I lay flat on the prow, with Tide panting by my side. He whines when he sees a dolphin fin breach the surface to our left. “I swear he can communicate with them,” Elliot yells from behind the helm. “They gather around the boat when I bring him.” Tide scrambles port to starboard and back again, whimpering with excitement. Sure enough, we hear the pooooshof three more dolphins breaching just a few feet ahead. “Is this the Kiawah River pod?” I shout into the wind. Elliot nods and grins. The Kiawah River is magnificent in the clear afternoon sun, the marsh golden. In just a few short weeks it will turn a gray-red and shed large mats of cordgrass out to sea.

The back barrier is a unique and curious thing. The small hammocks that protrude from the expanse of marsh are former shoreline, sand ridges from a bygone era. The oldest beach ridges on Kiawah Island are around four thousand years old, so the hammocks are likely much older. Through the millennia, Kiawah has remained a healthy barrier island with an excess of sand. Because of this extra sand, the island has been growing seaward for the past five thousand years. The water is displaced to the back side of the island, the back barrier, creating the Lowcountry marsh. The displaced water that flows in through the tidal creeks has enough velocity to carry sand and sediment in, but as it settles at high tide, it drops this muddy mixture into the back barrier. This accumulation of sediment is what created the network of marsh flats and tidal creeks that we see today. The resulting pluff mud is so fine that it acts like clay—binding the flats together. In fact, looking at the mud wall of a marsh flat, it often holds together as a vertical face, crumbling in chunks rather than spilling as a slope to the water.

The marsh is alive with the burbles and clicks of mussels, oysters, and fiddler crabs. 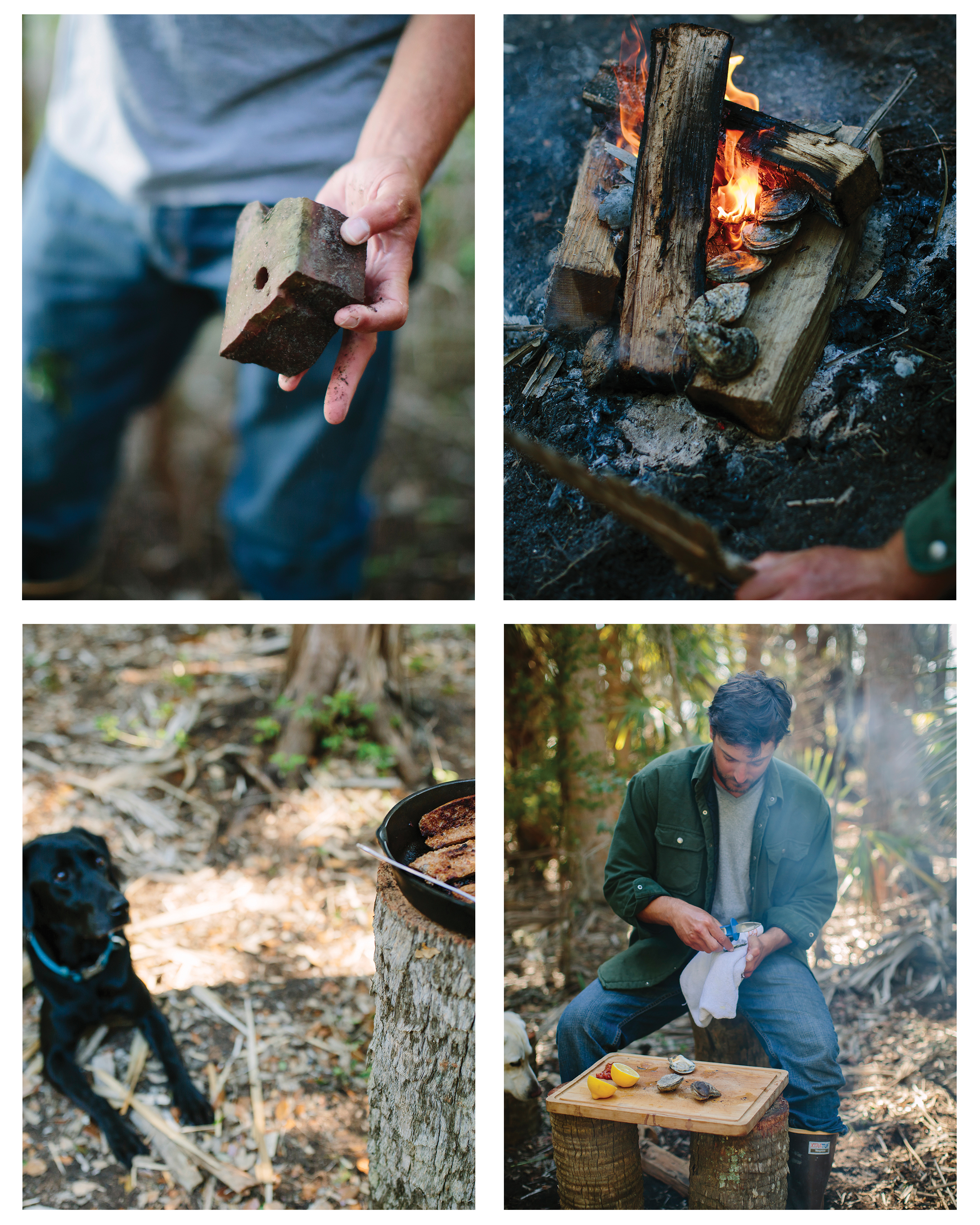 Elliot knows every creek and cranny of this back barrier. He grew up on Kiawah and has been exploring the small hammocks since boyhood. He’d hunt for deer sheds and old glass bottles with his dad, occasionally finding treasures from another time—old bricks washed up from nearby plantations, cooked oyster shells grown into the roots of twisted old trees. The Kiawah of Elliot’s youth was a bit more quiet. Back then, you could drive on the beach, the roads to the east end of the island were all dirt, and Ocean Park was a tangle of maritime forest, a haven for white-tailed deer and bobcats. Few kids lived on Kiawah, and so Elliot immersed himself in the natural world—hunting and fishing and learning the rhythms of the barrier islands.

We pull up to the small hammock on the leeward side. The dogs bolt onshore in a flash, disappearing into the dense bush. We unload the gear and Elliot produces a small chainsaw from the back of the boat. He promptly finds a downed palmetto trunk and saws it into six three-foot stumps for seating around the fire. It is still quite light and we explore for a bit, watching the tide suck away from the island and out to sea, climbing into the lower branches of a gnarled cedar, and picking the best spots to pitch our tents. A little later on, we hear calling from the creek and another boat pulls up next to ours. J.D. Hunter and his girlfriend Katie B. are old friends of Elliot’s, and they are joining us for dinner.

We make a small fire and Elliot goes to work, slicing wild boar sausage that he harvested from Johns Island a few months before and dropping it into a big pot with corn, shrimp, and new potatoes—a Lowcountry boil at its best. J.D. has brought a box of oysters, which we shuck while waiting for dinner, dressing them liberally in Elliot’s homemade cocktail sauce. When the interior of the little island grows dark, we walk in pairs to watch the sun setting from the front side of the island. The marsh is alive with the burbles and clicks of mussels, oysters, and fiddler crabs, and in the fading light the grass almost seems to glow.

There are two species of spartina in the Lowcountry marsh; alterniflora is the most common and has a higher salt tolerance, meaning it can be submerged the deepest and the longest in the tidal cycle. It is what you see in the vast expanse of sea-level marsh. Spartina patens has a slightly lower salt tolerance, meaning it can’t be submerged for as long and grows at an incrementally higher elevation. A third species, called juncus, has the lowest salt tolerance and grows at the highest points of the flats. Alterniflora dies off earlier than the other two species so the colors are patterned by where the marsh is a bit shallower. From the air you can actually see these subtle elevation differences in the color of the grasses.

We all fall asleep to the gentle sounds of the marsh, to the slow and steady flow back to high tide.

Back at the campsite, the Lowcountry boil is ready and we fumble around in the near-dark, handing out silverware, spooning food onto plates, and refilling wine glasses. Like all meals eaten out in the elements, the boil is astoundingly good. J.D. and Elliot get to talking about the good old days on Kiawah. Elliot’s mom was pregnant with him at the same time J.D.’s mom was pregnant with his older brother Budge. The two families lived two doors down from each other in Inlet Cove. Elliot and the Hunter brothers were thick as thieves in the summer months when the Hunters came to the Island as teenagers. “We would go load the back of the truck with cast nets, bait, and rods,” Elliot remembers. “We’d surf fish at the end of the beach and fish the lagoons at night for big reds, trout, and flounder.” 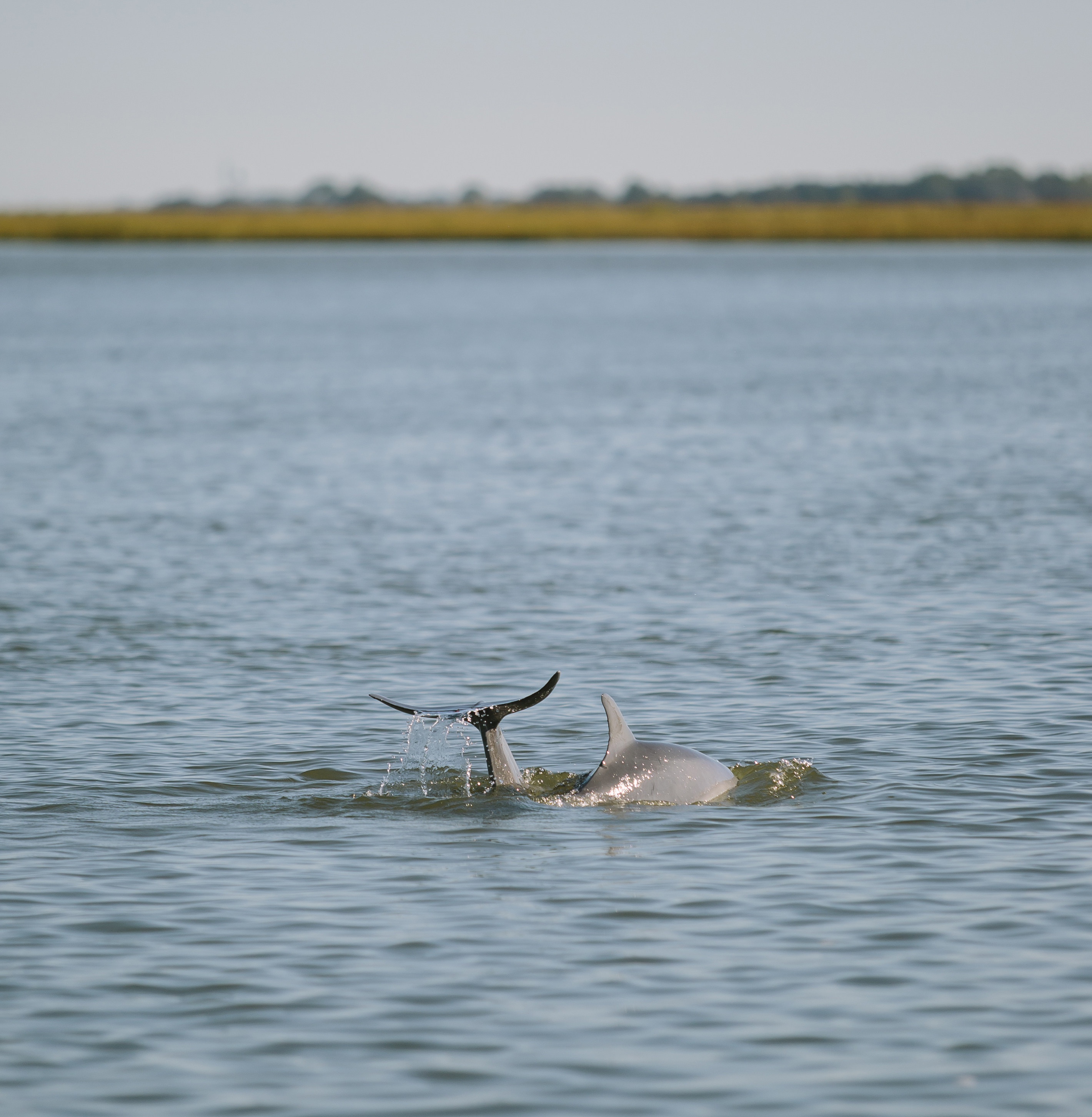 Before J.D. and Katie B. depart, we clean and stack the pots and cooking utensils. The fire has died down and we decide to go for one more walk around the island in the moonlight. We pick our way to the northern tip and push out through the dense holly to the marsh. The moon is waning gibbous and we all stand there for a bit in silence, drinking in the night air. The tide is still out and the sounds of the marsh seem even louder in the dark. Even the dogs stand still for the moment, listening.

These small islands are home to white-tailed deer and raccoons, not to mention a myriad of different lizards and insects, rodents, and bird species. At extremely low tide larger mammals might walk from the larger barrier islands, but more than likely they swim through the tidal creeks. And at the end of the summer, when the spartina is breaking off and accumulating in large mats, smaller species actually raft over, riding through the creeks on a makeshift grass boat.

We all fall asleep to the gentle sounds of the marsh, to the slow and steady flow back to high tide. Just when I’m settling into my sleeping bag, I hear Elliot from across the island, making an incredibly realistic marsh hen call. I want to communicate back, so I call out my best chicken cluck. And to all a goodnight.

In the morning as we break down camp, Elliot fries up another link of boar sausage and we eat it sandwiched between two slices of Krispy Kreme doughnuts. On the ride back, dolphins flank the boat on either side. Tide is again in a flurry, scrambling over mounds of duffel bags and ice chests to commune with the smiling mammals.

As we pack up and say our goodbyes at the dock, two glossy ibis glide in and land just a few feet away. They stand in the morning sun, looking at us for a while. It feels like a proper send-off. And that’s the thing about Kiawah—it always delivers.  — H.W.